CONTEST REMINDERS: My contest here is still open until Friday at midnight Deborah's Contest
and you can still enter at Bitten by Books for the $50 Amazon gift card until Friday as well. And I can't believe NO ONE said anything about my very first Vlog :-(

And now to my special guest...
I first met Lucienne Diver in her agent persona, when I started stalking following her online back in the days when I was still working at getting my fiction published. She was always smart and kind, and generous with her advice and encouragement, and we eventually became pals, bonding over our shared love of Ren Faires, jewelry making, and general silliness. In fact, she was instrumental in my signing with Elaine Spencer, her fellow agent at The Knight Agency, and so we became Agency Buddies. Then Lucienne had her Vamped novels published at Flux, an imprint of Llewellyn Publishing (where my nonfiction books on witchcraft come from), and we became Publishing Company Buddies. (Fun fact: our birthdays are also just one day apart. You know, and a few years.)

We finally met in person at the RWA National Convention in 2009, and we had a great time together. Now we both have books coming out on the same day, September 2nd, so we are Book Release Buddies too. In honor of our mutual release date, I’ve invited Lucienne to come by my blog and talk about herself and her new book, and I’ll be visiting her blog to do the same. I hope you’ll visit me there and say hi! (She interviewed me, too.) http://luciennediver.wordpress.com/2014/09/03/deborah-blakes-wickedly-dangerous/

Let’s give Lucienne a nice warm welcome! And be sure to answer her question at the end, since she’ll be giving away a signed copy of her book so a random commenter.

DB: Hi Lucienne, welcome to the blog. For people who aren’t familiar with your Latter-Day Olympians series (which I LOVE, by the way), could you give us a brief overview of the series and then tell us a little something about the new book, Battle for the Blood? 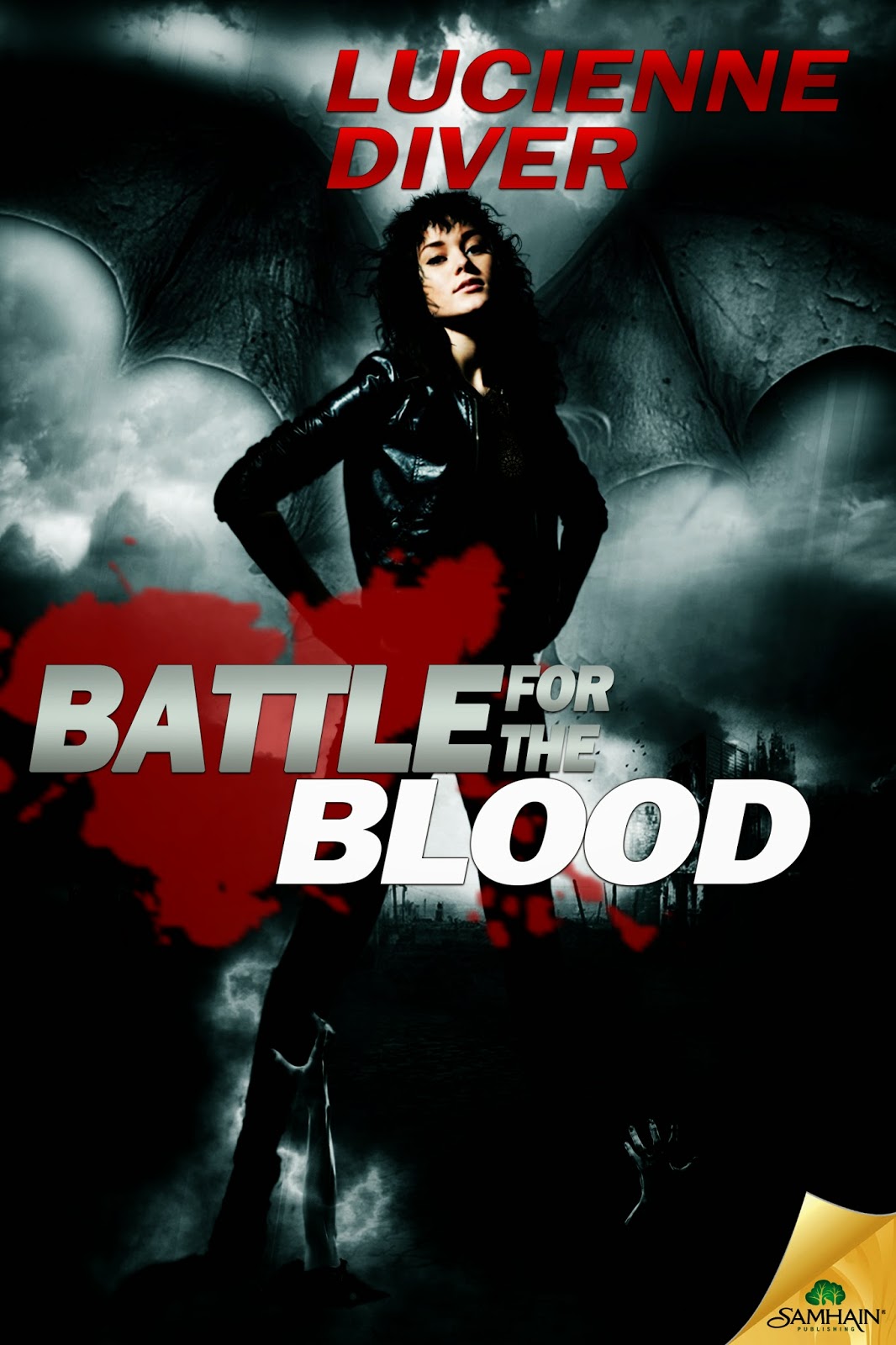 LD: Absolutely, thank you!  To understand the Latter-Day Olympians, I have to start with some background.

My heroine’s family line may or may not trace back to when the god Pan beer-goggled one of the gorgons.  Certainly that’s the way the stories go. Tori Karacis never believed such nonsense, despite the evidence of some of her family’s more colorful attributes—her grandmother the bearded lady of the Rialto Bros. Circus, her parents and brother able to fly through the air with the greatest of ease, her own strange power to stop men in their tracks, even if she can’t actually turn them to stone.  That is, she doesn’t believe until she witnesses a murder by something that looks like the Creature from the Black Lagoon…with the victim Circe Holland, brass-bra’d Hollywood agent rumored to be that Circe, the enchantress of myth and legend.  Well, that’s just the start of things (BAD BLOOD).  The series continues into CRAZY IN THE BLOOD, RISE OF THE BLOOD and, on September 16th, BATTLE FOR THE BLOOD.

By the end of each book, nothing is quite the same…or ever will be again.  There’s crazy fall-out from the proceeding books, along with all new threats.  The tensions escalate, the stakes are higher…  In BATTLE FOR THE BLOOD, Tori isn’t just dealing with the loop I threw her at the end of RISE OF THE BLOOD, she’s dealing with the rise of an ancient Babylonian plague demon who’s stirring up nosoi, djinn, demons, and other forces dark and deadly enough to bring about an apocalypse. Various factions vie to control the daddy of all demons and the end of the world, hoping that they will be the ones to rise triumphant from the ashes.

DB: This series is very different from your first series, the Vamped books, which are very funny and snarky. Where did the idea come from for these books?

LD: The series sprang from two sources, really—my crazy family and the five years I spent on Latin in junior high and high school.  I thought at the time that I might want to be a doctor (before I realized how ridiculously squeamish I am), and teachers, etc. had told me how helpful it would be in understanding medical terms to know the Latin roots.  Well, that turned out to be a bust, but my favorite part of my Latin class was when we went over religion and culture.  It turned out that I wasn’t so much cut out to be a linguist as an anthropologist.  Specifically, and I think my medical interest played into this, I was fascinated by forensic anthropology.  I even applied to grad schools for it at the same time I applied for jobs in publishing.  Publishing got back to me first, which turned out to be a good thing, because as much as I like mysteries and skeletal remains, they don’t always come fully skeletonized.  Examining remains in situ means bugs, fluids, any tissue still attached and, well, we’ll leave it at that.

As far as my crazy family—I wouldn’t have them any other way, but, well, to give you an idea that we may be an acquired taste…you know Stephanie Plum’s family in Janet Evanovich’s bestselling series?  Well, sometimes I wonder where she’s hidden the video cameras around our familial homes.  (For me telling tales on my family, check out the post I did for Faith Hunter’s blog here: http://www.faithhunter.net/wp/2011/06/07/lucienne-diver-and-bad-blood/.)

DB: You are both an agent and an author, which gives you a unique view from both sides of the table. Can you give us a little idea of how you balance them both, and what a typical day might be like?

LD: I’m trying to find my new normal, now that my son is off to high school, shifting our whole schedule an hour earlier.  Traditionally, I wake up, have coffee, walk the dogs, kiss my husband and son good-bye on their way out the door and sit down to write for an hour before my agent brain kicks in, the phone starts ringing off the hook and my overflowing inbox calls me away.  I have about an hour a day to write during the week, which is not nearly enough, so I work weekends as well, sometimes carving out as much as two whole hours to myself before I have to put my work aside to read and critique manuscripts or actually spend time with my family!

DB: Do you have any more books coming out in this series? What are you working on now?

LD: Samhain has contracted me for a fifth novel in the Latter-Day Olympians series, which I’m really excited about. I’ve established in the series that the Greek gods didn’t necessarily start there, but have been various things in various cultures, changing with the times and the worship.  I’m planning, finally, to bring in Athena, but as her Egyptian counter-part…or anyway one of them.  The fun thing with mythology is that different sources point in different directions, so I can pick the one I like best!  All I’ll say is underworld goddess and escape from hell.

Outside of that, I’m working on a YA thriller that I’m equal parts nervous and excited about.

DB: Why don’t you ask my blog readers a question—and we can give away a signed copy of the new book to a random commenter!

LD: Sounds great! I’ll go easy on you all so you don’t have to have read the series already.  Maybe I can get you hooked now! What god or goddess or other mythological beastie most intrigues you? Who would you like to be or meet (or definitely NOT meet) in a dark alley?  I’ll give away a signed print copy of RISE OF THE BLOOD, which just came hot off the presses yesterday, to one lucky commenter. (Or an electronic copy of BATTLE FOR THE BLOOD, if you’d prefer.)

Thanks so much for being my guest, Lucienne. I can’t wait to read this new book myself.

Thanks so much, Deborah, I can’t wait to read YOURS! I’m off to go queue it up on my Kindle!