It's finally here! Today is book release day for Dangerously Divine, the second book in the Riders series. 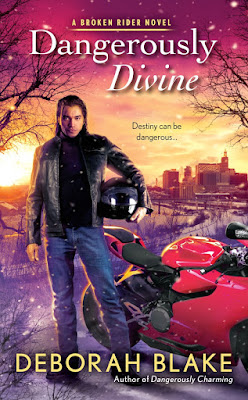 Magic the Cat is very excited, as you can see. Are you?

Be sure to let me know if you read the book and like it. And don't forget, the best way to help your favorite authors is to leave reviews (well, and buy books, of course).

Love you all lots,

Deborah, sitting here in the corner twitching and waiting to see if people love the new book...

Release day for Dangerously Divine is right around the corner (Tuesday the 28th!), so I'm going to be popping up all over the Interwebs with fun things and giveaways. Today I'm kicking off the Black Friday short short story blitz at Literary Escapism with a short story about Gregori which takes place right before the events of Dangerously Divine. The poor man is trying to find the perfect Yule gifts for three Baba Yagas, their husbands, a teenage witch, and little Babs. Where on earth could he ever find something perfect for such an eclectic bunch? Find out the answer HERE

I'm also giving away a $25 Amazon gift card over at the blog, so be sure to enter the contest after you read the short story. I'd love, love, love it if you'd come back here and tell me what you thought!

Speaking of contests, don't forget to enter the one here on my blog http://deborahblake.blogspot.com/2017/11/huge-giveaway-for-dangerously-divine.html It's on through the end of the day Sunday. Or Monday. I can't remember. Either way, go enter now! (Check out the list of other giveaways on that post too.)

And the lovely Maria V. Snyder is doing a Thanksgiving giveaway of a few of her (FABULOUS) books, plus those of some of her favorite author pals. She surprised me by including a copy of Dangerously Charming as one of the giveaways. Isn't that sweet? Because the contests are for real readers, not just people who enter every contest they see, you have to answer questions to enter. But she said it was okay to tell my readers the answers, just in case they hadn't read her books (hint: you should, they're amazing). So you can use "Ari" and "Janco" or just put in "Deborah sent me" to enter. Maria's giveaway

If you haven't done it yet, you might also want to check out my new Patreon page. We're going to be doing lots of fun things over there, including a serialized never-before-seen humorous paranormal novel and monthly witchcraft classes, for people who sign up at certain levels. PATREON

But do come back here and tell me if you read the story, and if so, what you thought! Happy Black Friday all. I'm off to work at The Artisans' Guild.

Come Support Me on Patreon!

I have exciting news! I’ve decided (okay, been persuaded) to start a Patreon page. For those of you who aren’t familiar with Patreon, it is a way to support the authors (or artists, or various other types of creative people) whose work you enjoy. It is very simple. Patrons sign up to make a monthly contribution (as little as a dollar a month) to the “creator” of their choice, and in return get various rewards that are not available to the general public. The greater the monthly pledge, the more exciting the rewards.

Needless to say, not everyone can afford to do this, or will have any desire to support their favorite authors by doing anything more than buying books and leaving the occasional review. That’s just fine. But for others, it is an opportunity to be a part of the creative process, support folks they admire, and get fun and interesting rewards in the process. And those they support get to do what they love and worry just a little bit less about money.

To be honest, the deciding factor for me was the recent insane vet bills for my beloved cats. (Mystic is on a medicine that costs, I kid you not, $300/month. But without it, he wouldn't be here.) I didn’t want to do a Go Fund Me and just ask for money, and I’d already been playing around with the idea of doing a Patreon page, since it allows me to give back to the folks who support my efforts. It’s something of an experiment, and we’ll see how it goes.

But in the meanwhile, here it is. Feel free to follow this link and see what it is all about! 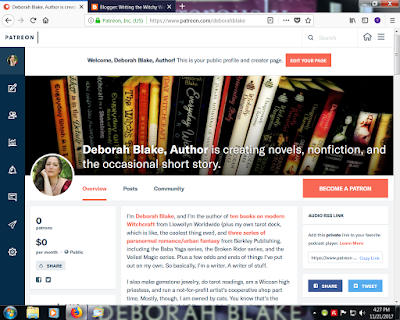 Thanks in advance to anyone who jumps on board! *smooches*

Posted by Deborah Blake at 4:31 PM No comments:

Email ThisBlogThis!Share to TwitterShare to FacebookShare to Pinterest
Labels: and now for something completely different, helping the authors you love, Patreon, rewards


It's almost here! Those of you who read Dangerously Charming back when it came out in October of 2016 have been waiting patiently for the second book in the Broken Riders series, and your patience is finally going to be rewarded! Dangerously Divine, Gregori's story, is coming out on November 28th, and I don't know about you all, but I am a little excited!

So naturally, I'm doing a big ol' giveaway. There are three prizes: a $25 Barnes & Noble gift card, a signed copy of the book, and the grand prize of a Kindle Fire 7 Tablet. Woot! I think Magic the Cat approves. 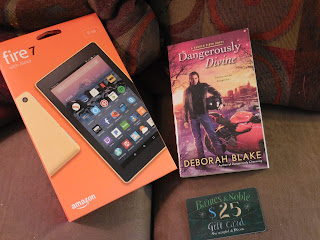 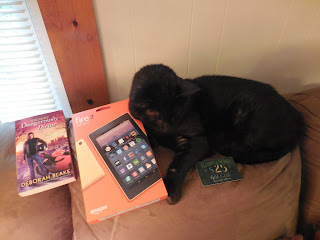 I'm also going to be all over the interwebs in the next week and a half, doing guest blogs, and answering questions, and posting excerpts, and giving away Amazon gift cards, so be sure to check in at the following sites:

There will probably be a few other things too, but my wonderful publisher is also doing a giveaway on both Rider books through November 24th. Enter HERE
As well as a Goodreads giveaway of BOTH Riders books (through Nov 26th) HERE

But in the meanwhile, be sure to enter my giveaway here too. As always, no purchase is necessary, and all you have to do is fill out the Rafflecopter form. Yes, you get credit for things you have already done, like following me on Twitter (you do, don't you?). Counting down the days until Dangerously Divine is out in the world!

I'm launching a Patreon page to help support the cats and my writing. (This is a thing where people pledge monthly support to someone who creates some form of art, like writing.) And I'm wondering what rewards people would like for the various levels of support. Here's your big chance, people--tell me what you want, what you really, really want!

I put a poll up at the top of the page, and it will run for about a week. The options there are what I've been thinking about doing, but I am open to suggestions. (The way it works, everyone gets the simple rewards, no matter how much they pledge, and the more you pledge, the fancier the rewards get.) I'm also open to suggestions. So tell me what would get you excited about supporting my work?

Come on now, tell me what you want!

ETA: If you click "other" in the poll, leave a comment here to say what it is you want.
Posted by Deborah Blake at 7:03 PM 1 comment:

Email ThisBlogThis!Share to TwitterShare to FacebookShare to Pinterest
Labels: Patreon


I can't believe it! DANGEROUSLY DIVINE will be out in less than a month! Release day is November 28th. Whoo hooo! I hope you are all as excited as I am to *finally* get to see the second book in The Broken Rider series out in the world. (The first one, DANGEROUSLY CHARMING, came out over a year ago, in October, and this one was supposed to be out in March this year, but got pushed back by the publishing company due to scheduling issues. So if it seems like there has been a long gap, you're not imagining things.)

The Broken Riders series is a spin-off from the Baba Yaga series, and follows the three Riders introduced in those books. DANGEROUSLY CHARMING, the first in the series, was Mikhail's story. DANGEROUSLY DIVINE follows the adventures of his brother Gregori Sun, the Red Rider. I had a lot of fun writing this book, which is set in Minnesota. (Fun fact: that's where my witchcraft book publisher, Llewellyn, is located, so I was able to pick the brain of my nonfiction editor for info for my fiction.) I really adore Gregori, although he isn't as flashy as his two brothers. Who is your favorite?


Here's what it is all about. (And don't believe the weird glitch in the listing Amazon has under their rankings. There are no vampires in the book. Oy.) Just in case you need to catch up, I'm going to give away a copy of the first book

The Riders: Three immortal brothers who kept the Baba Yagas safe, now stripped of their summons to protect. But fate is not finished with them—and their new callings are even more powerful...

Though his physical wounds have healed, Gregori Sun, the eldest of the Riders, remains in spiritual turmoil. His search for his mother, the one person able to heal his soul and save his life, is failing—until he crosses paths with a beautiful and fascinating librarian who might be the key to his salvation...

Ciera Evans’s bookish ways are just a guise. The product of a difficult past, she has dedicated her life to saving lost teens—by any means necessary. She works alone, but when a dark, brooding stranger proposes they team up to solve both their problems, she is tempted—in more ways than one...

After Ciera and Sun’s plans are derailed by dangerous enemies, they find themselves entangled in an ungodly affair—one that will force them to either find new strength together or be forever haunted by their pasts alone.


Just in case you need to catch up, I'm going to give away a copy of the first book, PLUS an ARC (advanced reader copy) of the new one! Plus, I have a couple of those cute key rings I had made for Dangerously Charming, so I'm going to throw one of those in too. Let's get this party started.

As always, just use the Rafflecopter form below. You get credit for anything you do already (like following me on Twitter and signing up for my newsletter) and extra credit for leaving a comment, or a few other things. (Just as a note: Dangerously Charming hasn't had a review in EIGHT MONTHS! Sniffle. So if you read it and liked it, I'd be forever grateful if you'd pop over to Amazon, Goodreads, or B&N and leave a quick review. It doesn't have to be long or fancy.) No purchase necessary.

Although I'll be pretty happy if you preorder the book, of course.


And watch this space, because there are all sorts of other good things coming up as we get closer to release day!