It has been a rough week in Casa Deb. If you haven't been following along on Facebook, Twitter, or my Patreon, you  might not know that I had to take Harry Dresden in to the vet early on Saturday morning after Thanksgiving. (On Small Business Saturday, when I had to be to work at the shop by about 9:15 and work most of the day.)

Harry hadn't been eating well for days. At first I thought it was just a hairball, which he's had before, but by Friday night is was clear something was really wrong. He stopped eating altogether and was very lethargic. SCARY.

I was at the vet for their emergency Saturday hours at 8:04, right after they opened. Our regular vet wasn't on duty, but the new vet, Dr. Inman, was just lovely. She examined Harry and he had a fever of almost 105 (cat's can run up to 102.5 and be considered within normal range, but 105 is HIGH). All the blood tests came back normal, including precautionary testing for feline leukemia and feline AIDS (whew). X-rays were inconclusive, but we thought maybe he'd eaten a mouse or something that didn't break down entirely. I had to leave him there for treatment for the weekend, but at least I knew he'd be in good hands.

Saturday night his fever was down (with kitty NSAIDS) and he'd had a big poop, so we thought maybe he was past the worst of it. But Sunday she called and told me his fever was back up. More x-rays, more blood tests. Some discussion of possible scary rare illnesses that we wouldn't be able to send out blood tests for until Monday.

Then on Monday, he was better! Fever had gone down and stayed down, and he was eating again. They wanted to keep him one more day just to be sure, but he seemed recovered. I went in to visit him after work and got lots of kisses and wiggling (he'd been so sick when I brought him in, he just sat in my lap listlessly). My friend Ellen, who works at the vet as a dog groomer, called me that night to tell me he'd complained LOUDLY after I left without him, and made everyone crazy. Oops. But still, a good sign.

So I picked him up Tuesday afternoon. He was definitely feeling better, and much perkier. (I, on the other hand, was a little less perkier after I paid the bill. Oy.) And very happy to be home, even if Ember and Koshka hissed and growled at him because he smelled like vet. I was mostly just really relieved that it was over, because to be honest, I was terrified I was going to lose him too, and after this year, I didn't know if I could bear it.

Then he didn't eat dinner. And barely touched breakfast. So I called my regular vet, and she told me she thought I should bring him back in. (Along with Angus, who has a huge sore on his neck and was supposed to go on Tuesday, but managed to elude me.) Did I mention it has been snowing all week?

So much for my day off when I was going to get lots done. But kitties come first. So back we went, with both cats complaining loudly about the unfairness of it all. (Which was actually a good sign in Harry's case, because he hadn't made a peep when I took him in on Saturday.)

Still no temp, and he looked otherwise good except some redness in his throat, like a human might get with a bad bug. So Dr. Baker thought he'd probably had a virus, which he was still fighting a bit of, and the antibiotic he'd been put on (which would be useless against a virus, but had been a precautionary measure because we had no idea what was going on) was probably making him nauseous. Poor boy. So that's been discontinued, and he's back home again. He only nibbled at dinner, and a bit more later, but I've got my fingers crossed that he'll feel more like eating in the morning.

Huge appreciation to all my Patreon supporters--the money from that will really help to pay these vet bills. More appreciation to the people who have been buying the new necklaces and signed books I've put up on my Etsy Shop. That helps too.

Plus all the folks who have been sending out prayers, good vibes, and Reiki. You all rock.

Here's hoping that Harry Dresden is back to his usual spunky self soon.


I realized I hadn't posted a report on The Wild Bunch in a while, and since I just took them all to the vet on Wednesday for shots and exams, I figured this would be a good time.

They're all doing very well--getting along with each other and Angus. They're technically not kittens anymore, since Harry Dresden is 15 months old and Koshka and Ember are about 17 months. But they still ACT like kittens, ramming around and getting into things and occasionally breaking something. (Sigh.) 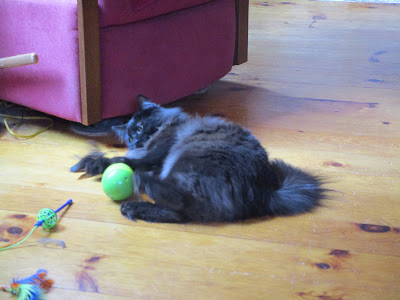 This is Koshka, playing with all the toys at once. 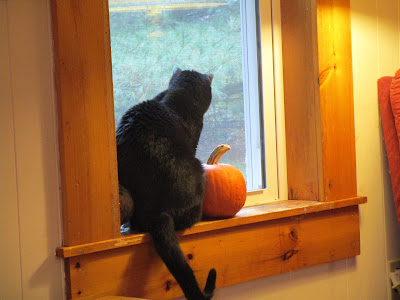 Harry seemed to enjoy his first Samhain/Halloween. He went dressed as a witch's cat. 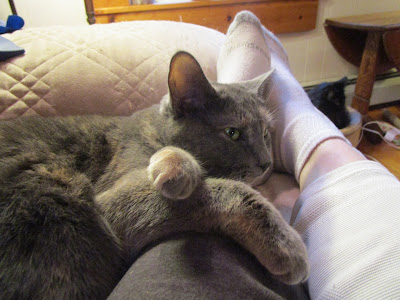 Ember is turning into a bit more of a cuddler than she was in the beginning, although when she comes to bed with me she still insists on sleeping down by my calves. 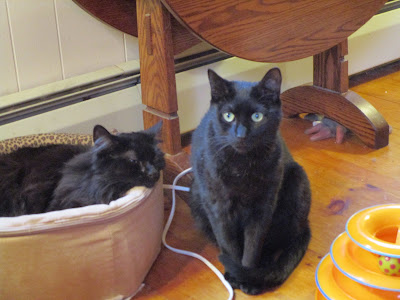 Two black cats, but as different from each other as they can be. 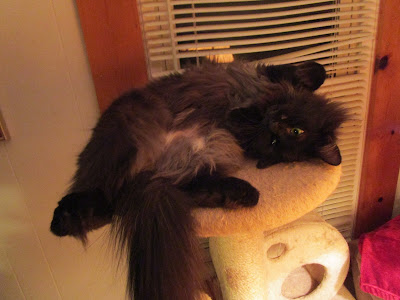 I call Koshka my "Fluffernutter," because he is both fluffy and nuts. 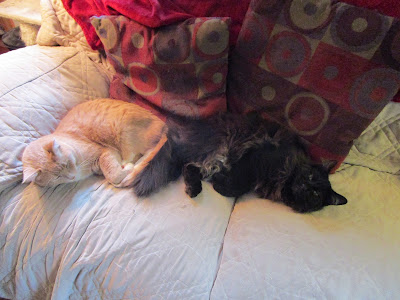 Angus gets along with everyone, thank goodness. He's enjoying being the one in charge for a change.

The vet report was good. Everyone is healthy. Ember is actually the heaviest, at 10.4 lbs--and because she's small, I'm going to have to watch her weight. She's a tiny bit tubby. Harry Dresden weighed 10.3 and is sleek and fast as a demon, and Koshka is 9.7 lbs--all that fur is deceptive, and he looks larger than he is. The other two have probably stopped growing. If Koshka is part Maine Coon, as we think, they can keep growing for 2 or 3 years, so he might get a bit bigger.

I still miss Magic and Mystic terribly, and these guys aren't as consistent about keeping me company in bed, which is rough and makes me threaten to get another cat...but mostly they are wonderful and I feel very lucky to have found them all.