First off, can someone explain to me how it is the end of 2015? Seriously. What the heck happened to this year? Oh, wait, this happened...

WRITING
This was an insane year for the writing--probably the busiest I have ever had.

So a good year, but INSANE. Hopefully 2016 will be a tad bit calmer.

Yeah, sure. That could happen.

TRAVEL
Then there was the traveling. I rarely travel much, in part because the cats don't like it, in part because frankly, I am a lousy traveler, and in part because I don't have the time or money. None of that seemed to stop me this year. This is where I went:
To say that I am happy to be done with traveling for the year would be a huge understatement, although I am heading back out in February for four days in Daytona Beach for Coastal Magic.

Personal Stuff
In between all this, I was dealing with my step-daughter Jenn's mom Jo (also a friend of mine) who had a massive heart attack in March and then another smaller one in early November. This has meant a lot more visits from Jenn, mostly to see her mom, and adding care-taking to my list of things to do, now that Jo is in a nursing home (since Jenn lives across the country and can't do handle most things from there). But we had a lovely Christmas together with our friend Ellen this year, so that was nice. (Ellen gave us all imaginary perfect gifts...that's what we're holding up.)

And running The Artisans Guild and making jewelry, and doing all manner of work on my house...so pretty much, life. But a good one.

I hope that you had a great 2015. I'd love to hear what the highlight of your year was. I think mine was meeting Tamora Pierce. What was yours?

Thanks for spending this year with me, and I look forward to sharing 2016 with you--may it be filled with health, prosperity, achievement, joy, love, and at least a little magic! 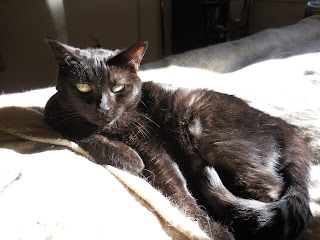 
Yule, also known as the Winter Solstice, starts either Monday night or Tuesday morning, depending on which part of the country you live in. (If you're in the Southern Hemisphere, you're observing the Summer Solstice instead, of course.) In celebration of all the holidays at this time of year, as well as my new Llewellyn book contract (you KNEW I was going to do a giveaway for that, right?) I'm going to do one last giveaway this year. It's a cool one!

The giveaway includes a reversible oversize tote bag with EVERYDAY WITCHCRAFT on one side and The Witch's Broom (still on sale in Kindle form for only $2.99, but I have no idea for how long!) on the other side. Also, the last of my Everyday Witchcraft notebooks, and a cool Yule broom ornament I special-ordered from some lovely Pagans in France on Etsy to give to my family and friends--this was the last of those, too. See how special y'all are? Plus, of course, some misc. swag and bookmarks and such.

All you have to do to enter the contest is to use the Rafflecopter form below and choose some or all of the options. (USA only this time, alas. Don't worry, I'll do another world-wide one in the new year.)

Tell me, what do you celebrate at this time of year? Hanukkah, Yule, Christmas, or some combination? What do you do to celebrate?

Wishing you all a fabulous holiday season and a blessed Yule!

BIG News for my Llewellyn Readers


I keep saying that I'm not going to be writing any more books for Llewellyn, because writing the novels for Berkley is taking all of my time these days. In fact, I've been saying that for a few years. But then my beloved editor Elysia asked me if I could write The Witch's Broom book (the Kindle version is on sale for $2.99 right now, btw), and since she's my favorite, I had to say yes. Then I got the idea for Everyday Witchcraft and I just had to write that one. But that's it, I said. Absolutely no more.

Only, um, I got this idea about a year ago. And I was silly enough to mention it to Elysia at Pantheacon last February, and she mentioned it to Bill, the publisher, who was there too, and they both said, "We REALLY want you to write this book."

I said no. I swear I did. I'd just gotten the second Berkley contract with two new novels, a new novella, and the revisions for Veiled Magic and there was no way I was going to have time. Absolutely not. Every once in a while Elysia would email me and say, "Hey, when are you going to write that book we talked about?" or "Gee, Bill reminded me I should ask you about that book." "No," I said. "Can't possibly do it. Way too busy."

But here's the thing...it's kind of a cool idea. I've had lots of fans ask me if I could do a year and a day book, or some kind of witch's devotional, or something along those lines. So the idea I got, almost a year ago, was to do a 365 Day book that would take the reader on a path through the year that would teach, inspire, and recharge them, no matter what their level of experience or the depth (or lack thereof) of their practice. It could be used as a personal year and a day journey, or as a devotional, or just for fun.

Did I mention I love 365 Day books? I have them for writing, and witchcraft, and other spiritual paths, among other things. 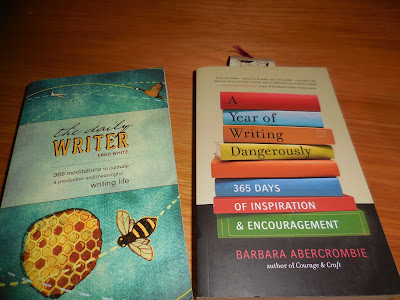 So when Elysia emailed me again a few months ago and said, "REALLY, Bill wants to know when you're going to sign the contract for this. We really, really want you to write it!" I um, kinda said, "Okay, you win. I'll write it."

The contract for the tentatively titled 365 Days of Everyday Witchcraft got signed this week, just in time for Yule. Consider this my gift to you, my readers, who have been so lovely about supporting all my previous work. It won't be out until late in 2017, because, you know NOVELS (and the tarot deck that's coming out in January 2017), but you will be getting one more witchcraft book from me.

This is the last one. I mean it. Seriously.

Anyone besides me a little excited about this? (And yes, I'll probably be doing a giveaway later this week to celebrate--I just couldn't wait one more minute to share the news!)

Cross-posted by Deborah and Elisabeth:

As many of you know, we (author Deborah Blake and illustrator Elisabeth Alba) have been working all year on a tarot deck for Llewellyn Worldwide. There was an important meeting at Llewellyn this week and we have a few exciting things to announce. First off, we finally have A TITLE!

Introducing…EVERYDAY WITCH TAROT (and its accompanying book, The Guide to the Everyday Witch Tarot). Ta da!

The book cover will feature the High Priestess card: 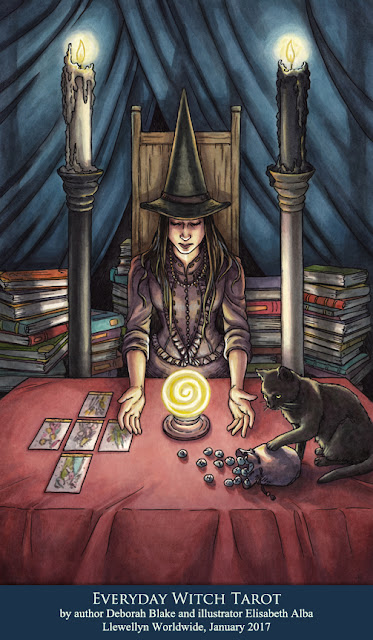 And the kit cover will be the Judgment card: 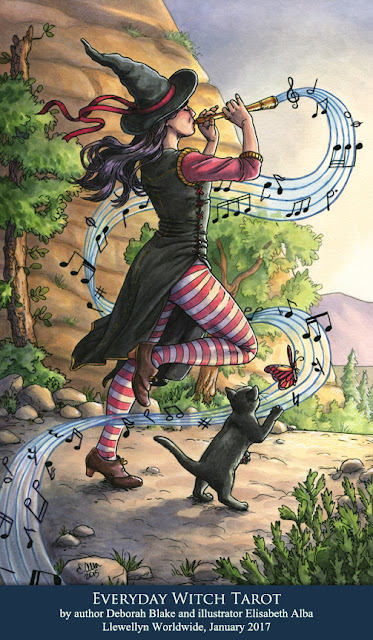 This is what Elisabeth looked like after finally finishing the last painting! 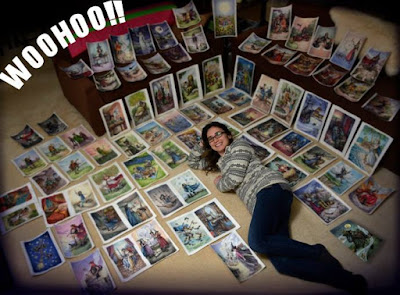 The deck will be out in January 2017, a little over a year from now. We can’t wait!
For those of you who are impatient to get this deck (and who could blame you), Elisabeth and I will be posting an occasional "sneak peek" until it is released.

So, anyone else excited too?

P.S. -- For the tarot lovers among you, I saw that Llewellyn has a big tarot sale on right now. You might want to go take a look, even though you won't be able to get this one for a year. Llewellyn Tarot Sale


So it has been about two weeks since Veiled Magic came out, and people seem to like it. YAY!

I'm so happy, I decided to do another giveaway, just because I can. And to say thank you to all of you, for helping to make the book a success.

Look what I've got:

There's a Veiled Magic tote bag and notebook, plus a postcard, and a broom pen, plus a cute stuffed dragon because, seriously, who doesn't need more cute? I might toss another couple of fun things in there too, you never know.

Here's a couple of cool screen grabs I took off of Amazon while I was (coff) NOT obsessively checking to see how the book was doing.

This was on the Tuesday a week after the book came out:


The second one is Amazon's "Customers who bought this item also bought" list--OMG! I'm listed with Patricia Briggs, Jennifer Estep, and Ilona Andrews...now that's some good company to be in.

So tell me, did you get a copy? And if you did, have you read it yet? Did you like it? (Not that authors care about such things...just curious.) Or, you know, just comment on something.


Next up, I'll be talking about the first book in the Riders series (a continuation of the Baba Yaga books, starring the Riders). And how the book tried to kill me.

Thanks so much to everyone who bought Veiled Magic, talked about it to their friends, or just cheered me on. You guys rock.