An Update on Magic and Mystic

I'm sorry I haven't been around much this month (although if you follow me on Facebook and Twitter, you can at least find me there). It's December, so I'm insanely busy running The Artisans's Guild and making jewelry to sell there, plus, you know, DECEMBER. But I've also been spending a lot of my time and energy taking care of Mystic and his sister Magic, both of whom are battling cancer. I won't kid you--it has been a tough time here, although well worth it.


The kittens, as I still tend to think of them, although they're both fifteen, would be turning sixteen on January 11th. Barring a surprise development, Mystic will probably make it, although he gets skinnier and pickier about food all the time, and is on a bunch of expensive medicines. Magic, on the other hand...well, it is the season for miracles, so I guess we'll see. Right now I'm just praying she makes it through the Christmas holiday, when my vet is closed for 2 1/2 days, and I'm working at the shop (where people probably wouldn't appreciate me weeping all over their gifts).

For those of you who didn't already know, Mystic has been battling what we're pretty sure is some kind of lymphoma since May. No one, including my vet, expected him to still be here now, but my cats are nothing if not stubborn. He's gone from 16.8 lbs to about 11, and back in August we had to put him on pain meds for what we assumed was "hospice care" for the last few weeks of his life. Apparently they keep him feeling pretty good, since he's still here. I've given up trying to predict how long he will last, but our best guess is another month or two. In the  meanwhile, though, he is still feeling perky enough to play with his pal Angus and torment his sister, although I have to feed him 6-8 small meals a day and sit with him to encourage him to eat. Plus he gets fluids every other day, for the beginning of renal failure which was probably brought on by the cancer.


The one good thing about how long this has dragged on is that it has given me time to make my peace with it, as much as is possible. Magic, well, that one is tougher.


For one thing, we have an incredibly special relationship. I love all my cats, but Magic is also my familiar, and the only really snuggly one of the bunch. She sleeps by my head and purrs me to sleep each night, and sits on my lap while I eat breakfast. She supervises my writing (and everything else I do) and attends ritual. Plus, of course, she is so much a part of my writing career, I sometimes think she has a bigger fan base than I do!


A couple of months ago, she had what I thought was a bad reaction to a rabies shot, and almost died. It turned out my vet saw something suspicious near her spleen on the x-rays and we shaved her belly (she did NOT approve) and did an ultrasound, which showed a cluster of grape-like cysts, almost certainly a different type of cancer. One of the cysts had burst, flooding her body with poison. We put her on prednisone, which might have shrunk the tumors (it is probably controlling the ones her brother has), but my vet always said it was a long shot, and when we did another ultrasound three weeks ago, it showed the tumors had grown to be massive. My vet (who is wonderful, and very supportive) called her "a ticking time bomb." Essentially, one of these--now much larger--cysts could burst at any moment and kill her. It isn't a matter of if, but rather, when. It is too large and chancy to operate on, and there is essentially nothing to do but wait, and be grateful for every moment of every day I still have her with me.

Ironically, despite this, she seems to be a perfectly normal (well, if any cat of mine could ever be called normal) and healthy cat. She did suddenly get very picky about food a couple of weeks ago, and there have been two times when she stopped eating (probably from nausea) and I thought, "This is it," only to have her perk up again. Today, she is feeling pretty good. Tomorrow is anyone's guess.

I lost their mom last March, and Samhain three years ago this coming December 28th, so the crazy cat lady with five cats will soon be down to one. They're going to drum me out of the CCL union!

In the meanwhile, I'm doing my best to stay positive, and keep them comfortable. I am incredibly grateful for all the support people have given me online--my peeps are the best. I am ESPECIALLY grateful for the folks who have signed up to support me on Patreon. I'm actually $53 away from being able to cover the monthly costs of Mystic's medication, which is huge. I love, love, love all my Patreon followers. If you're interesting in checking out the reward levels (which start as low as $1), you can see them HERE. (I'm even offering live online witchcraft classes, an "only available there" novel in installments, and private tarot readings.) Even if you aren't interested in doing that, all your messages and encouragement have meant the world to me.

I know what's coming, although I don't know exactly when. And I know it is going to break my heart into a million pieces. But these cats have been one of the greatest blessings in my life, and the last fifteen plus years with them have been worth all these hard moments at the end. Love always comes with a price, but it also brings so much joy.

So despite the sadness here, the furball gang and I wish you a very Merry Christmas, a happy Hanukkah, and a blessed Yule.

Witchcraft Classes Starting Up On Patreon

For those who are looking for a little magical study in their lives, the first of my live witchcraft classes is on Wednesday evening. This is available to my patrons who give $25 per month. That amount is right in line with what I would charge for a class at your local pagan store or in person. We'll be holding the class online, using video conference via Zoom. (If you can't join us online, the video can be viewed later.)

Our first class will focus on Yule with a Q&A to follow. The awesome part is that you get to suggest topics for future classes! There is a limit to the number of folks who can sign up for this so if you're interested, pledge at the $25 level on my Patreon page!
https://www.patreon.com/deborahblake
Posted by Deborah Blake at 8:32 AM No comments:


Cover reveal time! Here's the cover for VEILED ENCHANTMENTS, the final installment in the VEILED MAGIC trilogy. It will be out March 20th, but you can preorder it most places now. You know, so you don't forget...

So, what do you think? 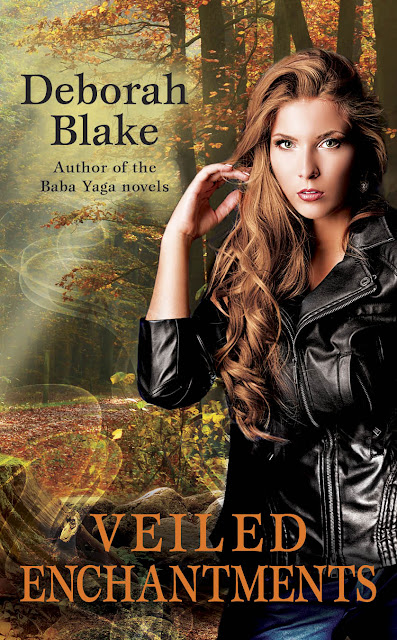