Anyone who has been following this blog for a while knows that there is one day I look forward to all year--my annual outing to the NY Faerie Festival. It takes place about 50 minutes away from me, in tiny Ouaquaga, NY and it is always a blast. Think of it as a mini Renaissance Faire with faeries, trolls, and the occasional mermaid. 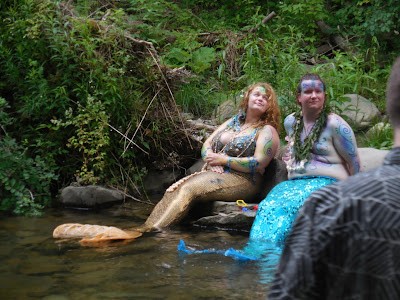 I always go with my best pal Ellen and our friend Robin, who brings her kids (my goddess-children) Nate and Sophie. Sadly, Nate was sick this year, and had to stay home, but Robin made up for it by bringing her brother, his partner, and their baby, who had come for a surprise visit, and her friend Nichole and her four kids. We were quite the group! This is the gang, minus me, because I was taking the picture.


The festival takes place on a lovely piece of land with trees and a stream (see picture above!), and oh, the sights that you see. This year it is two weekends instead of one, so you can still make it to this coming weekend's event if you want to.

Here are a few pictures from the day, which was blessed with fabulous weather (a few sprinkles, but not too hot and not pouring, so really, perfect). Now I start counting down until next year!

So, tell me, do you have an event or outing you look forward to all year?

Posted by Deborah Blake at 8:45 AM No comments:

Email ThisBlogThis!Share to TwitterShare to FacebookShare to Pinterest
Labels: a day out, Ellen, fun, Robin Wright, the NY Faerie Festival


I'm so excited! I can finally share the cover up the upcoming Baba Yaga novella, WICKEDLY SPIRITED! The novella will be out September 19th, and features Bella's protege Jazz, who we first met in Wickedly Powerful. I had so much fun writing this one, and I hope you enjoy reading it. (It's only available as an eBook because of its length, but on the bright side, it is only $1.99!) The novella is up for preorder now. Just sayin'.

And with no further ado, here is the cover! Look, Koshka the dragon disguised as a giant Norwegian Forest Cat is on it too. 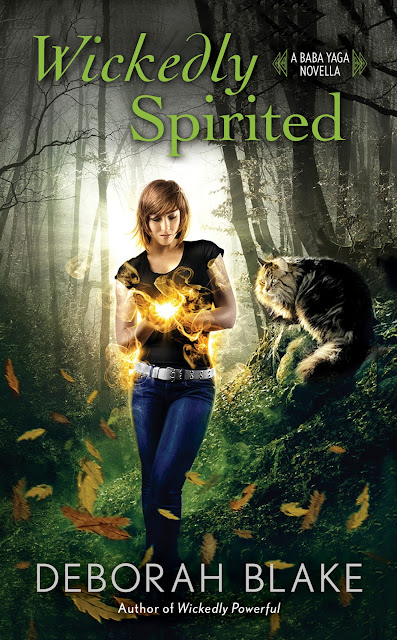 If you need to catch up with the Baba Yaga series, now is your chance! I'll be putting up a giveaway in the next couple of days...I haven't decided exactly what is going to be in it, but there will definitely be a signed copy of Wickedly Powerful. So be sure to check back.

Here are some buy links for Wickedly Spirited:
Amazon
B&N
Books a Million

So, what do you think of the cover?


Every year I pick one or two projects to do around the house (and by "to do" I usually mean "pay someone else to do," although there are no end of things I do myself). This year it was the bedroom closet, which I posted about earlier, and the garden pond.

I actually built the pond myself, about 15 years ago when I first moved into the house. It was a pretty good job, if I say so myself, but it wasn't perfect, and man-made ponds don't last forever. It had already started going downhill in the last few years (the plastic liner was starting to crack, the water lilies had seriously taken over, and it was filled with sludge at the bottom) but last year's knee issue made it even harder to keep up with it, and pushed it passed the point of no return.

In theory, I could have rebuilt it myself, but A) the knee is still messed up, and not up to the task and B) OMG, those rocks are heavy! So I got a couple of stellar recommendations for a guy named Pat Ryan, a stone worker, and he spent five days taking the entire pond apart and putting it back together again. The end result was beyond my wildest dreams, and I consider it to be an investment in my mental health, because the sound of the waterfall is so lovely.

Here's a glimpse at the process. 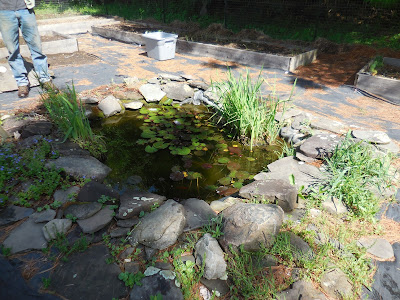 This was what it looked like when we started. Not terrible, but clearly overgrown. That's Pat in the corner, planning what he's going to do.
This was not a job for the weak of heart (or muscles). At this point, I was REALLY glad I'd decided to have someone else do it. 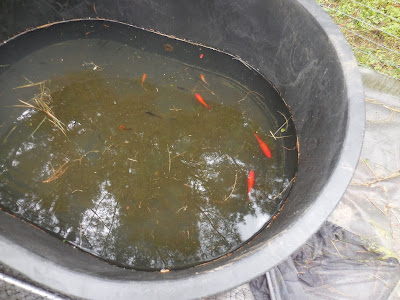 The few fish that were left were rescued and put into this big tub to wait for the pond to be done. The frogs evacuated on their own, and I'm still waiting for them to come back.

The old pond used a filter and fountain combo that sat inside the pond and were a pain to keep clean. Pat decided to build me a waterfall instead, to aerate the water better, with an external filter that will require a lot less maintenance. 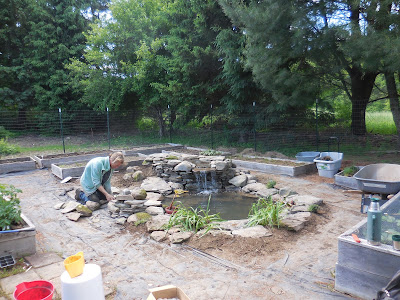 Pat was absolutely meticulous, even going so far as to build a surround to disguise the electrical post. 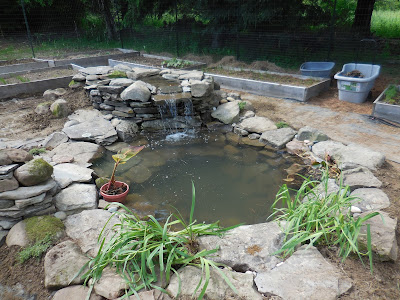 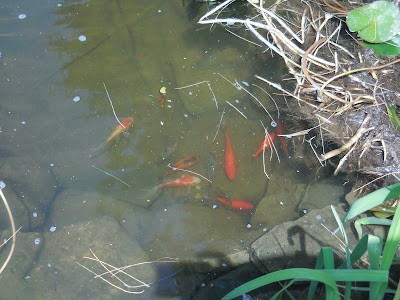 I treated myself to some new fish!

Here's the finished project. Isn't it amazing? I need to figure out how to upload a video, so you can hear the fountain. I love this so much. What do you think?

Email ThisBlogThis!Share to TwitterShare to FacebookShare to Pinterest
Labels: fish, house projects, in the garden, Pat Ryan, the pond


Sorry I've been a little quiet here, but on top of trying to get the garden in, dealing with a sick cat, and another major project around the house (report coming soon), I have had a LOT of writing tasks on my plate.

To be honest, I do a lot better when I can focus on just one project--put my head down and write, write, write. But once you are published, especially if you are juggling more than one publisher, as I do with Berkley (the fiction) and Llewellyn (the nonfiction), it rarely works that way. I often have to jump from one project to another, which hopefully I'm getting better at, although it will never be my best thing.

So here's what I've been working on and what's on my plate for the next few months:
Not on this list, but arriving at some point will be the revisions for the second Rider novel, copy edits for it and the novella, and proofs, ditto.

Plus writing cover copy for the Sekrit Project and organizing the cover, etc.

And somewhere in there, I should be making some more jewelry!!!! *falls over with a thud*

Email ThisBlogThis!Share to TwitterShare to FacebookShare to Pinterest
Labels: a day in the life, Life of a Writer, OMG sometimes writing is hard no really, updates


Some of you have been asking on Facebook how my cat Mystic is doing, so here is a quick update. The short answer is: Not great, but as well as can be expected. The long answer is as follows...

Basically, he's dying. Thankfully, he is--for the moment at least--doing it slowly and without a great deal of discomfort. In fact, he mostly seems pretty content.

He has lost a LOT of weight, though, which is never a good sign with a cat. He used to weigh over 18 lbs, back in the day, and for many years was stable at about 16.8 (after changing his food). At his checkup a couple of weeks ago, he weighed 12.7 lbs. That means he's lost about a quarter of his body weight. Not good. So a big part of the struggle these days is getting him to eat. While he still nibbles on his prescription dry food, mostly he is eating Friskies and Meow Mix wet food, which he thinks is grand. Although the cats as a whole get fed twice a day, he now gets lots of small meals in between.

He's on a number of meds, including prednisone, Miralax and a stool softener to deal with his chronic constipation, and an antacid (a liquid he hates) that he gets right before bed because his tummy gets upset when it gets too empty. The last couple of nights I've actually gotten up and fed him in the middle of the night, but I'm not sure how often that's going to happen. Yawn.

When we went to the vet in January, his blood tests showed the beginnings (just stage one, not even worth doing anything about) of kidney failure. The tests last time showed it was much more advanced, so he is now getting subq fluids at home every other day, or whenever I can get someone to come over and hold him. He may be down to 12.7 lbs, but all of it is stubborn muscle :-)

Essentially, what it comes down to is that his system is slowing down/breaking down. Some of this is the end stage of years of irritable bowel syndrome, and some of it, perhaps, is due to something we haven't found--my vet thinks it is possible that there is some sort of underlying cancer, like leukemia. To be honest, the cause doesn't matter, since all we can do is treat the symptoms and keep him as comfortable as possible.

It is, needless to say, heartbreaking to watch him go downhill. When we lost his mom last year, it was pretty drastic over the course of a couple of months. This is more of a downward slide, and as always, unless something truly drastic happens, the hard part will be figuring out when it is no longer fair to him to keep fighting. Until then, however, he is worth all the time and effort, and we will keep fighting the good fight until it isn't good anymore.

He may be 15 years old, but he is still my kitten.