Hey, peeps! Most of you know Elisabeth Alba from her illustrations of our Everyday Witch Tarot deck, as well as the upcoming Everyday Witch Oracle deck we're working on now. She's sharing some advanced images and details of the work over on her brand new Patreon page, and I thought that some of you might be interested in what she's up to, so I suggested she guest post here. Take it away, Elisabeth!

Hi Everyone!
Thanks to Deborah for allowing me to be a guest blogger here.

This is a portion of a post I created for my patrons on my Patreon page at www.patreon.com/elisabethalba. It shows the process of the painting, “Listening,” for the Everyday Witch Oracle deck I am working on with Deborah (who is also on Patreon at www.patreon.com/deborahblake), published by Llewellyn Worldwide.

If you're interested in seeing in-depth step-by-steps behind my artwork, please check out my Patreon and consider becoming a patron! I plan on sharing in-depth posts about the creative process behind many of the oraclecards as well as other artwork I create, timelapse videos of painting, videos around my studio, and other goodies like holiday cards, desktop wallpapers, and monthly coloring pages. I'm really excited to have this opportunity to share my art life with you all!
Note from Deborah: I'm following her there and I LOVE watching the process as the paintings come alive! Plus, I can't wait to get the coloring pages. 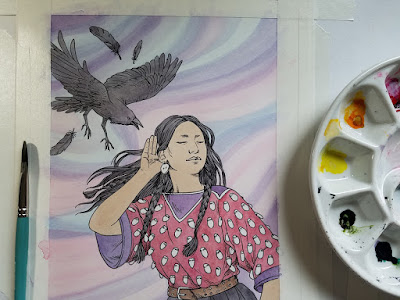 Here is Deborah's initial description for “Listening”: Close-up on a witch with one hand behind her ear, eyes closed and smiling, listening to a magical wind blowing by. A bird is hovering, perhaps whispering in her other ear. The feeling is thoughtful and attentive.

The deck is divided into elemental suits – Earth, Wind, Fire, and Air. “Listening” is an Air card. My first rough sketch had a generic witch thrown in, white with long black hair and black hat, but after working on the sketches for all 40 cards, she evolved. The biggest fault with the Everyday Witch Tarot was its lack of diversity, and Deborah and I knew we wanted this deck to be the opposite, and represent the many people who use and appreciate tarot and oracle decks. In “Listening,” I painted an Apsáalooke woman. Many Native American legends of crow birds are about how they are the wisest of birds and that they have the power to talk. The Apsáalooke were given their name by a neighboring Siouan-speaking tribe and it means "children of the large-beaked bird," so it definitely seemed fitting to have this card represent a woman of the Crow Nation, as they came to be called in the English language.

Here are the two rough sketches of Listening, side by side: 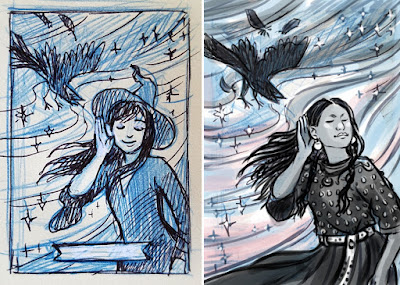 After the sketch was approved I gathered reference material and also took photo reference of myself wearing a robe. The outfit she is wearing is based on traditional Crow clothing for women - the white objects sewn on are elk teeth! I didn't want her to be completely traditional though, since the deck is for modern witches, so gave it a bit of an update with hair half braided and half down, and a black skirt. 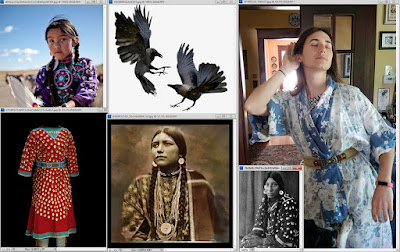 I then did a more refined sketch, figured out what colors I wanted to use, printed my sketch onto watercolor paper, inked it, and then it was finally ready for watercolor!
Here are stages in the painting process:

And finally... the big reveal! Here is the completed painting, ready to be an oracle card! 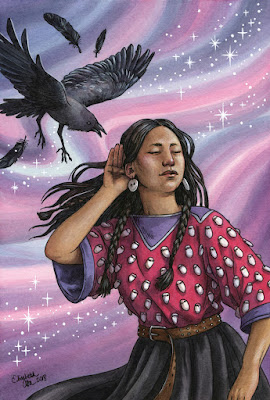 Thanks for following along on the process for this painting! I will share little bits here and there on social media, but I plan on devoting more time to these behind-the-scenes posts over on Patreon.  Please consider joining me there!
Thank you for the interest in our oracle deck. We are having so much fun working on it!

Thanks from me too! Just for fun, Elisabeth sent me a couple of packs of her new book plates, and we're going to give them away here.

All you have to do is enter this simple Rafflecopter form, just like always. We'd love it if you'd check out our Patreon pages, but of course, only follow if you want to!

What I did On My Summer Vacation

I just got back from spending five days in San Diego. My parents live there, as does my younger sister, and I went out to visit them (and the ocean, which is my happy place). As a bonus, my daughter Jenn and her guy Ian (who I adore) came in from San Jose for a couple of days too. Ian's parents Maureen and Sean live in San Diego as well, and I met them when I was out there last September and we really hit it off. So seeing them was on the schedule too.

Unlike most of my trips, which are to conventions and conferences, and therefore mostly work, this one was just about spending time with the people I love and communing with Mama Ocean. I was really excited that Jenn and I would be together for the summer solstice, since she used to be a part of Blue Moon Circle when she lived here in Oneonta.

The flights were all long but uneventful, and my sister Becky very kindly picked me up at the airport when I arrived on Monday, and took a detour to bring me (briefly) to the beach on the way to my parents' house. So in the end, I actually made it to the ocean every day of my trip, which was great. Here are a few pictures from the trip.

I don't usually do "selfies," but I posted a picture every day of me with the sea behind me, just to prove I was really there!
Of course, I couldn't go to the beach without a good book...

The day that Jenn, Ian, Maureen, Sean and I spent together happened to be both the Summer Solstice and Maureen's birthday, so we celebrated at my favorite restaurant, The Poseidon, which is right at my favorite beach in Del Mar. We shared lots of good food and all of it was delish!
Then the guys snuck off and had the waiter bring out a giant piece of mud pie with a candle for Maureen (the glass was a trick to keep the ocean breeze from blowing the candle out before she could).

Later, Maureen, Jenn, and I danced on the beach with cool colored flags Jenn brought, to celebrate the solstice. It was one of those rare perfect moments.

Three happy goddesses :-)
Here's Jenn and Ian at my parents' house. I'm probably prejudiced, but I think they're an adorable couple. 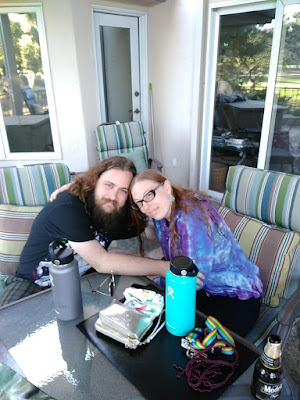 This one is a terrible picture, but it captures how much fun we have together, so I'm putting it up here anyway. I think my sister said something to make us laugh just as she took the picture. 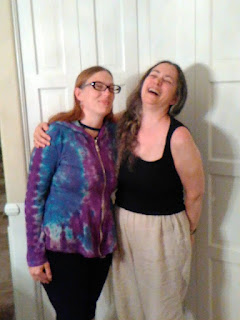 My parents took us out to Chili's one night. I'd never been to one, and there was way too much yummy food. Ribs. I love me some ribs. And onion rings... 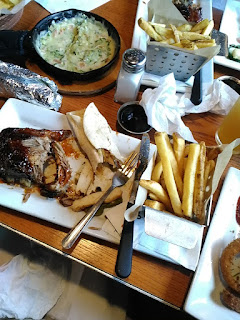 Another one of the "happy at the beach" shots...
On the last day, my dad and I went and hung out at the beach together, and like any good dad, he bought me an ice cream cone. It was just perfect. (Coffee, in case you were wondering.) Thanks, dad!
You probably can't tell, but I really, really love the ocean. It's my happy place. And it has been a rough year so far, so I really needed it! 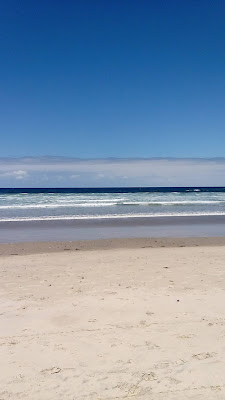 There are no pictures of my parents or sister because they hate having their pictures taken. (I got a few, but only by PROMISING I wouldn't put them online.) But take my word for it, they are all glorious.

I was sorry to say goodbye, but happy to be heading back to my goofy cats and my own bed and my writing. Alicia, my fabulous cat sitter, went above and beyond by coming to fetch me at the Albany Airport (about an hour and a half from my house), and then it was back to reality. Hopefully the peace and joy of the ocean and spending time with family will linger a little longer than the jet lag...

Email ThisBlogThis!Share to TwitterShare to FacebookShare to Pinterest
Labels: family, Jenn, San Diego, summer solstice, travels, what I did on my summer vacation


The Summer Solstice is coming up soon, on Thursday June 21st. I love this holiday for its sheer joy and exuberance, and even wrote a book about it--one of the Llewellyn Sabbat series. 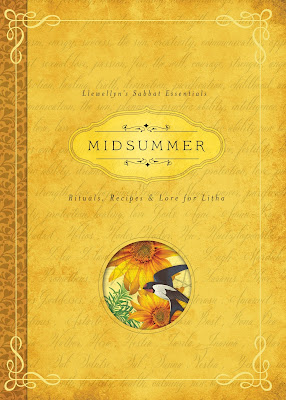 The Solstice is a celebration of abundance and energy and all the green (and pink and purple) growing things of summer. Even if you're not a Witch, you can get together with friends and have a BBQ or a picnic, or go to the shore if you are lucky enough to live near the ocean.

I'll actually be in San Diego on the Solstice, so hopefully I'll get to the ocean with my daughter Jenn and her guy Ian, and maybe my parents. Jenn's a Pagan too, so maybe we'll even get to do some little ritual together. (The one with Blue Moon Circle will have to wait until I get home.)

The book is still available (here's the Amazon Link) but I thought just for fun I'd give away one of my last few copies--signed, of course. This will be a quickie giveaway, so I can get the book mailed out in time for the Solstice. As always, just fill out the Rafflecopter form.


The new kitties are getting big enough that it is hard to look at them and think "kitten" instead of "cat." Until they start ramming around, getting into everything, and then it is clear that they are still kittens at heart.

Koshka is a little bit bigger than he was, but at about 10-11 months old, it is still clear that he isn't likely to get nearly as large as he probably should have been, because of his rough start at life (in a 25-cat hoarding situation with his sister Ember). He looks more and more like a Maine Coon Cat or a Norwegian Forest Cat every day, with long hair and a tail that looks like it has a mind of its own! Thankfully, he is very cooperative about being brushed.

He gets along fine with Harry Dresden and Angus, as well as his sister, and is generally a very mellow kitten. But he does get into EVERYTHING, especially if food or paper are involved. Luckily, he is so sweet, I mostly forgive him... He also chews on my shoes, so maybe he was a puppy in another life?


I call him my "Fluffernutter" because he is both fluffy and completely nuts.

What do you think? Isn't he gorgeous?

I'm not around as much at this time of the year, in part because I am madly trying to get the garden in and up. Here are some pictures so you have proof that I'm not just ignoring you!


Anyone else gardening? What are you growing?

Email ThisBlogThis!Share to TwitterShare to FacebookShare to Pinterest
Labels: a day in the life, in the garden, what I do when I'm not writing
Newer Posts Older Posts Home
Subscribe to: Posts (Atom)