To celebrate their 110th anniversary (yes, I know! whoo hoo!), Llewellyn is going to hold four live chats on Twitter, starting with the first one, tomorrow--Tuesday June 21st--with MOI!

Up for a COVR Award!

I found out from my editor, Elysia Gallo at Llewellyn, that Witchcraft on a Shoestring is up for a COVR Award!

Check it out. Winners will be announced on the 25th, so keep your fingers crossed.

Email ThisBlogThis!Share to TwitterShare to FacebookShare to Pinterest
Labels: awards, Llewellyn, Witchcraft on a Shoestring 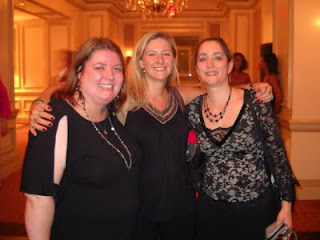 One of the coolest people I've met since I started writing is the gorgeous and clever Lucienne Diver. Lucienne is one of the agents at The Knight Agency, as well as a fabulous author in her own right. Her YA books, VAMPED and REVAMPED were funny and snarky and made me laugh out loud. Also, I've met her in person, and she's a sweetie. (That's Lucienne in the middle, at the RWA National Conference with me in 2009.)

So when she told me she had a new book coming out, I asked her to come her and say something about the writing process, and introduce herself to y'all. (I hope you'll say thank you by going to check out her book!)

So with no further blather from me, here's Lucienne:

Every writer has heard the dreaded words, “I have this great idea. Maybe you could write it and we can share the proceeds.” I always try very hard not to roll my eyes at this. Every writer I know has more ideas than time to write them. I’m not saying that ideas come easily, necessarily, but they’re certainly a piece of moist, delicious cake next to the much more difficult task of execution.

I’m a pantser, I admit it. I always start a novel knowing roughly what happens. I know the main conflict and a few of the milestones along the way, but that’s a far cry from knowing the exact path between points A, B, C and so on. Even knowing the path, there’d still be the matter of expression…putting words to the page in the character’s voice and really making the reader identify and care. You have to give the readers a world big enough to bang about in for at least a novel and often many, many more. That world has to be as believable as the real one for a reader to be able to tune out his or her reality and escape into yours. The magic system, if it’s fantasy, has to be well thought out and consistent, with a source or sources, limitations, cost, internal logic. The internal and external conflicts have to build and add depth and tension to the storyline. Readers have to be convinced that things could go kablooey at any time and have catastrophic consequences for the characters and often the world at large so that they’re briskly turning pages to the end, on the edge of their seats to see how it will all play out, breathless in anticipation. The climax has to blow the reader away, worth every single second of the build-up; and the denouement must be satisfying. (Though if it’s a series, perhaps not so satisfying that the reader doesn’t need to reach for that next book, so some threads are left unfinished.)

These are the true skills of a writer. Yes, you need a good idea, but it takes a lot of hard work and talent to turn it into more than that…into a novel.
See how I did with:
Bad Blood, first novel of the Latter-Day Olympians
Available digitally from Samhain Publishing June 28, 2011, print in 2012
Or the Vamped series, out now from Flux Books
www.luciennediver.com
Facebook fan page
Twitter 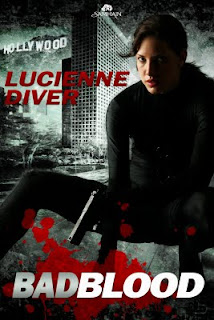 A Visit from the Magical Buffet!

One of the side benefits of being an author is that I have made a lot of great friends along the way. One of my favorite pals is Rebecca Elson from The Magical Buffet (www.themagicalbuffet.com )-- Rebecca is a blogger and a reader and a tireless cheerleader for all things me, bless her little heart.

And she lives about an hour and a half from me, so every once in a while we actually get to see each other in person, rather than communicating via email and FB. Yesterday she drove up here so I could do some energy healing work on her, and she brought me yummy lunch from Panera Bread. You can see her here, being ogled by Magic the Cat, who clearly thought there should have been a third sandwich. 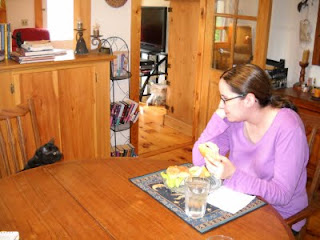 Then she interviewed Magic about the upcoming book. It was quite a conversation. I could barely get a word in. 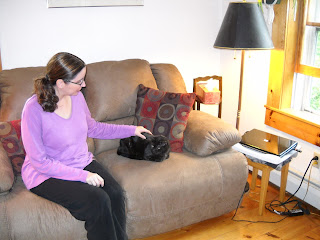 All in all, it was a lovely visit. Be sure to wander over to The Magical Buffet, where Rebecca talks intelligently about a variety of subjects, and go follow her on Facebook and Twitter. Be sure to tell her that Magic the Cat sent you!
Posted by Deborah Blake at 11:00 AM 1 comment:

Now's Your Chance--requests for rituals

There are some rituals and themes I already know I plan to include in the book, but I am open to suggestions and requests for the rest. So for anyone with a magickal inclination, I ask...

What rituals do you want?

Now's your big chance, tell me what rituals you need and haven't been able to find? What do you want to work on? Go ahead...tell me.

I don't promise to include anything in particular, but I am definitely open to requests!
Posted by Deborah Blake at 9:13 PM 13 comments:

I had planned to spend Memorial Day weekend doing the usual--writing, working in the garden, making jewelry...in other words, working. But a last-minute invite from my pal Robin and her hubby George prompted me to say, "The heck with it!" and drive (well, get in the car with Ellen, who drove) the 45 minutes to their house for in impromptu BBQ with friends instead. As a bonus, I got to spend time with two of my favorite kids in the world.

Okay--it's not like I am prejudiced or biased in any way...but I believe that my goddess-children, Nate and Sophie, are possibly the cutest children on the planet.

Seriously; you be the judge. 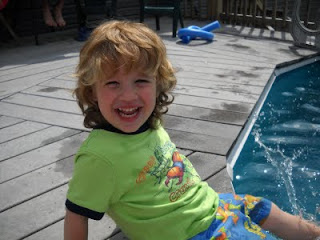 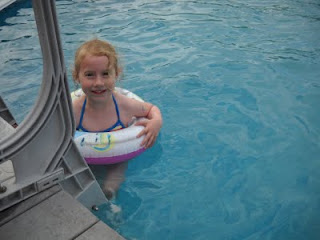 Today is an auspicious day--the birthday of two of my favorite writing peeps!

A big happy birthday wish to my writing partner and witchy pal, Lisa DiDio, out in California. Wish you were here so we could celebrate together.

Lisa is the best writing buddy anyone could ask for--not just a brilliant writer on the verge of breaking through, whose work is a joy to read, but also a great editor and first reader. I don't know what I'd do with out her. Also, she is WAY KEWL.

And happy birthday to Pagan writin pal C.S. MacCath, too. We "met" a few years ago when we both had stories published in the Pagan Anthology of Short Fiction. *waves to Nova Scotia*

I hope both the wonderful ladies have relaxing, fun-filled birthdays. And lots of cake.

Here's Lisa (at the back) when we were together at Pantheacon, earlier this year. And ironically enough, I met C.S. at Pcon in 2008. 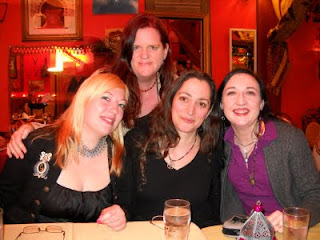 Sorry to keep you all waiting to hear the good news. I had to wait until Elaine, my agent, had gotten it posted on the official Publishers Marketplace site.

Non-fiction:Religion/Spirituality
Deborah Blake's 50 RITUALS FOR THE EVERYDAY WITCH, a comprehensive guide to a year of magical practice for the modern witch, to Elysia Gallo at Llewellyn, in a nice deal, by Elaine Spencer at The Knight Agency.

Who's got the champagne?
Posted by Deborah Blake at 4:15 PM 15 comments:

Have you ever seen one of those big billboards that says, "Watch this space"?

Watch this space.
Posted by Deborah Blake at 12:02 PM 4 comments: