My author pal Jim C. Hines and I were tickled to find out that we both had books out on the same day, February 2nd. So we decided to swap guest blog posts. I can tell you that I love everything of Jim's that I have read (which is all but a couple of the first series he did, which I own but haven't caught up on yet), and can genuinely recommend both the writing and the man. (If you're not following his blog, you should be. Just sayin'.)

Deb and I are new book twins this week. For her, it’s Wickedly Powerful, which I’m guessing you might have heard of? In my case, it’s a book called Revisionary. I’m going to talk mostly about the latter, but if you haven’t checked out Deb’s Baba Yaga stuff yet, you totally should. What I’ve read of it so far has been lots of fun.

Revisionary is my twelfth published fantasy novel. It’s also the fourth and final book in the Magic ex Libris series. Without getting too spoilery, this is a series about:

Note from Deborah: YES, this is as cool as it sounds!!!

The basic idea behind libriomancy is that people like my librarian Isaac Vainio can open a book and tap into the belief of the readers, using their passion and imagination to help create things from the pages. There are limits, of course. Whatever the libriomancer creates has to fit through the pages. No making an X-Wing and flying off to a galaxy far, far away. Pulling intelligent creatures from books tends to end badly (as exemplified in the bloody massacre known as “The Smurf Incident”). And Gutenberg has locked some books whose potential power is simply too dangerous for the world.

Part of the fun in writing these books was getting to indulge my inner fanboy and play with toys from other worlds. Isaac is a shamelessly enthusiastic geek, and he loves this stuff—books and magic and possibilities. Even when he’s running away from enchanted clockwork insects that really, really want to kill him, a part of his mind is marveling at the artistry and wonder of those murderous little automatons.

Most of us understand that books are magical. But the series title “Magic ex Libris” isn’t quite right. It means “magic from books,” which works…Isaac is constantly pulling everything from healing potions to light sabers to pixie dust from various books about his person. But books are simply the medium. At its heart, the series is about the magic of story. It’s about imagination and asking “what if?”

I’m a big believer in the power of story. Story can change the world, for good or for ill. Look at the number of sharks hunted and slaughtered in the wake of Jaws. Or consider Abraham Lincoln’s alleged comment to Harriet Beecher Stowe, author of Uncle Tom’s Cabin: “So you're the little woman who wrote the book that made this great war.” Think of stories that have opened your mind or changed the way you think about things.

I remember receiving an email from a reader early in my career. She’d read my goblin books while in the hospital for a nasty procedure, and said the humor and fun of the story helped her get through the days. Understand, my goblin books aren’t exactly Deep, Life-Changing Literature, but they provided comfort and escape during a very difficult time. I’ve seen people sneer at “escapist” literature, but if that kind of escape isn’t magic, I don’t know what is.

One of my favorite examples of the power of story comes from Nichelle Nichols, who played Uhura in the original Star Trek. Nichols originally intended to quit the show after the first season. Then she met a man who introduced himself as her biggest fan—Dr. Martin Luther King, Jr. In Nichols’ words:

“[H]is face got very, very serious. And he said, what are you talking about? And I said, well, I told Gene just yesterday that I'm going to leave the show after the first year because I've been offered - and he stopped me and said: You cannot do that. And I was stunned. He said, don't you understand what this man has achieved? For the first time, we are being seen the world over as we should be seen. He says, do you understand that this is the only show that my wife Coretta and I will allow our little children to stay up and watch. I was speechless.”

Stories can show us the world, and they can show us ourselves. They can create love and hate and despair and hope. They can change lives. They’re powerful. They’re magical.

I wanted to write a series that celebrated that magic.

Sure, I also wanted to write about a librarian who pulls out a lightsaber to fight a vampire in the steam tunnels of Michigan State University. And undermining various urban fantasy tropes was a lot of fun too. But ultimately, Revisionary and the rest of the series is all about the power of imagination and passion and story.

Thanks for reading, and thanks to Deb for lending me the blog. You can check out excerpts from the books over at my website if you’d like. Or leave a comment here, and I’ll pick one person at random to win an autographed copy of Libriomancer, the first book in the series. (If you’ve already read Libriomancer, I’m happy to send you a later book in its place.) 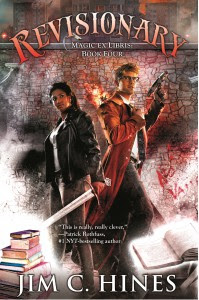 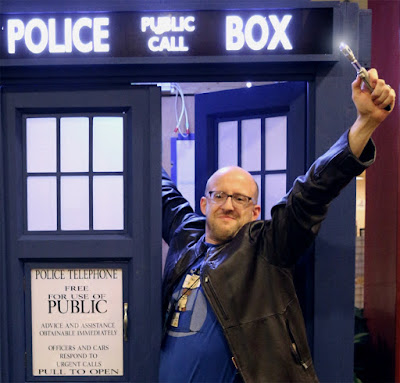 Thanks for dropping by, Jim!

Jim C. Hines is best known as a fantasy novelist and the guy who did those gender-flipped SF/F cover poses. His first novel was Goblin Quest, the tale of a nearsighted goblin runt and his pet fire-spider. Actor and author Wil Wheaton described the book as “too f***ing cool for words,” which is pretty much the Best Blurb Ever. After completing the goblin trilogy, Jim went on to write the princess series, four books often described as a blend of Grimm’s Fairy Tales with Charlie’s Angels. He’s currently working on the Magic ex Libris books, which follow the adventures of a magic-wielding librarian from northern Michigan.