I have been hard at work at the next installments in the Baba Yaga series. I'm midway through the next novel, WICKEDLY POWERFUL, and I just finished the second novella and sent it off to my editor, Leis. It is called Wickedly Ever After, and it revisits the first Baba Yaga, Barbara Yager, taking place after the events of the first two novels, WICKEDLY DANGEROUS and WICKEDLY WONDERFUL. Basically, it asks the question: Can the not-quite wicked witch of the story get a happily ever after?

Of course, you will have to read the novella to find out the answer. (Chuckle.) But since the novella won't be out until January 2016, people have asked me to give them a sneak peek. So here you are! And in case that wasn't enough, I figured I'd do a Baba Yaga themed giveaway too. So I'm giving away a large double-sided tote bag with the covers on either side, and in the bag will be signed copies of each of the two novels, a cool wicked witch magnet, and a few other goodies. 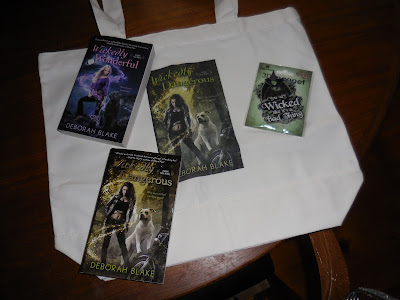 Here's your sneak peak...enjoy! (The giveaway is at the bottom of the page.)


The irresistible sound of a child’s laughter drew Barbara Yager’s eyes out the window as she stood at the kitchen sink washing dishes. A sweet smelling blossom-scented summer breeze floated in the through the open casement carrying with it the unaccustomed joyful noise of childish giggling.
The source of the laughter became apparent as soon as Barbara looked; little Babs, her adopted daughter and pint-sized Baba Yaga in training, was lying on the bright green grass being tickled by Liam, Barbara’s new husband. Her other companion, the dragon Chudo-Yudo in his customary guise as a gigantic white pit bull, relaxed on the lawn nearby, gazing on in benevolent approval.
Barbara couldn’t believe this was her life. After all, it was a far cry from the one she’d lived until recently, a solitary roaming existence with only Chudo-Yudo for company as she traveled the United States carrying out the duties of a Baba Yaga. Not that she’d had any complaints, mind you. It had been the life she’d been raised for as one of a small number of Russian fairy tale witches whose job it was to keep the balance of the natural worlds and guard the doorway between the Human lands and the fantastical Otherworld. She’d never expected anything else.
Not until Liam came along and changed everything.
A call for help brought Barbara to Clearwater Country in rural upstate New York, where Liam dedicated himself to upholding the law as sheriff. To say that their styles had originally clashed would be an understatement; in fact, Liam had for a time suspected her of being behind the disappearances of several young children. With her gleaming royal blue classic BMW motorcycle and black leathers, Barbara hadn’t exact fit in with the local population, and her cover as a traveling herbalist at one point made her look even more suspicious.
Thankfully, they’d eventually uncovered the actual culprit and after Liam found out who and what Barbara really was, they’d worked together to rescue the children, even though that had meant a trip to the Otherworld. While they were there, they had discovered Babs, stolen as a baby and given to Liam’s insane former wife to raise as her own. The unpredictable magic of the Otherworld had caused the infant to be about six when they found her, even though it had been less than a year since she’d been stolen from her murdered parents.
The too-solemn little girl and the antisocial Baba Yaga had been drawn to each other right away, and in the end, Barbara, Babs, and Liam had formed a family, as wonderful as it was unexpected. As the not-quite wicked witch in the story, Baba Yagas rarely got to act the part of the princess. But this time, Barbara thought she’d actually get the happily ever after, as unlikely as that seemed.
All that remained was one technicality, and they were going to take care of that this very afternoon. Barbara glanced down at her hands, sunk deep into soapy water, and acknowledged that she’d probably been stalling. Not because she didn’t want to return to the Otherworld, which was something of a second home to her when she was growing up, but because nothing was ever certain there—especially when the High Queen was involved. Still, the moment couldn’t be delayed any longer, or the Queen might consider it an insult, and that could be a fatal error.
Barbara wiped her hands on a dishtowel and opened the back door that looked out over the yard. Back doors and yards were just one of the many changes she’d had to get used to after years of traveling in the shiny silver Airstream trailer she’d inherited from her mentor Baba, who had lived long enough to oversee its conversion from the original Baba Yaga’s hut on chicken legs so renowned in Russian folklore.
The old yellow farmhouse was far enough outside of the town of Dunville to give Barbara the privacy she needed, with the South River as a boundary to the back and rows of tall pines on the other three sides. A faded red barn leaned slightly to the right at the end of the driveway and the Airstream was parked behind it out of sight until it was needed. If you ignored the benign ghost that haunted the place and the witch who lived inside, it was practically the picture of normalcy.
Weird.
Still, in general Barbara liked her new life, especially the part currently walking towards her in well-worn jeans and a tight tee shirt that accented his broad shoulders and slim hips. Liam had dark blonde hair and hazel eyes that twinkled when they saw her, and the sight of him still made her heart skip a beat every single time.
“Hey,” he said, folding his strong arms around her and giving her a quick kiss. “Where have you been? You’re missing all the fun out here.”
Barbara smiled at him. “So it seems,” she said. Liam swore that she still had a faint Russian accent, but she didn’t hear it in her own voice. “Was that actual laughter I heard coming from Babs?”
The girl in question picked herself up off the ground, brushing grass off of the brown shorts and shirt that matched her dark pixie-cut hair, and walked over followed by Chudo-Yudo. The dragon-dog had appointed himself her unofficial guardian and where one was, the other was likely to be found nearby.