My writer pal Gail Wood put up a great post on her The Rowdy Goddess Blog about the mythology and spirituality of Baba Yaga, and how she and her coven were using Baba Yaga energy to help them get through the bitter winter. (She might have mentioned my name a time or two as well...) And since we've spent some time here talking about my Baba Yaga characters in the upcoming novels, I thought you folks might like to see it. Thanks for sharing, Gail!
(And no, that's not a picture of the lovely Gail, it's a picture by amazing artist Kinuko Y. Kraft of Baba Yaga. Silly people.) 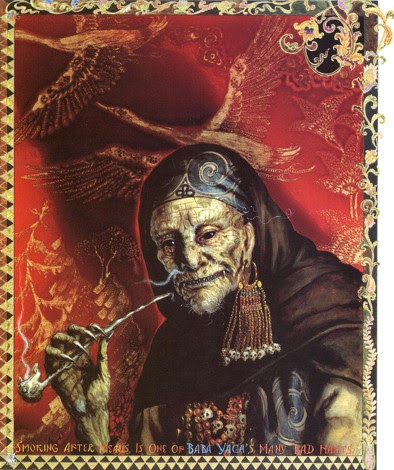 This eternal winter, dubbed the Polar Express by the press, has turned into a polar depression for many people.  The persistent cold and sudden snow squall is peppered by blizzards, traffic accidents, and cruel, teasing almost-thaws.  It can lay siege to our hearts and our nerves.  How do we melt our frozen wills?  By celebrating.

Our circle celebrates the hag.  We laugh, we kvetch, we keen, and we laugh some more.  Two of our witches have decided to bypass the wisdom of the crone and, as they say, “go straight to hag,” because the hag doesn’t care.  She wears what she likes, she says what’s on her mind, and she does as she pleases.  If children cross the street to avoid the hag’s house?  So what, the hag views that with glee!  And that is what the hag has become for us:  a woman of a certain age who stands in her power and acts as she wills.
Each quarter this year, we are identifying a Witch of legend and lore to celebrate and explore.  In the grip of a cold, harsh winter, we celebrate the Hag, Baba Yaga.

There is no character in folk-tales or mythology who is so irredeemable and wicked as Baba Yaga. She is a fearsome, ugly old hag who lives on the edge of the forest. Her house is surrounded by a fence of bones and topped with skulls whose eyes glow red in the dark. The house itself is set on chicken legs and can move around with great noise and frightening disruption.

The hag herself is not a pretty sight. Her nose is so large, it is said that it touches the ceiling when she sleeps. She has iron teeth and is frequently called, Baba Yaga Boney Legs. While she is said to have no control over the pure in heart, she does have a reputation for baking young children in her huge oven and crunching on their bones.

She rides around in a mortar using a pestle to propel her and when she arrives a great winds begins and stirs up the world around her. When she leaves, she removes all traces of herself with a broom made of silver birch. Sometimes her conveyance is a huge kettle. Other times, she appears as a kindly old crone, assisting people in distress.

Like so many legends and stories of the mythic creatures and the gods, there is great power underneath. Who was she before these stories; and who will she become as we work with her. The author Deborah Blake describes her journey of creating a modern-day story with Baba Yaga in it. You can read it at her blog. I am very much looking forward to reading her first novel published by a major house–it now has a cover.

As Blake points out, John and Caitlin Matthews in The Element Encyclopedia of Magical Creatures have researched the story behind the story of Baba Yaga, pointing that although she is portrayed as an “archetypal bogey-woman, she is actually a primal goddess. The mortar and pestle are symbols of creation and destruction, and her broom cleanses and cleans.

She inhabits the borderlands, those places between life and death, the places between this world and other worlds. She gave Koshei the Deathless, a dragon with human shape, his mortality. She also controls another fire-breathing dragon, Chudo-Yudo who guards the Water of Life and death.  She has fierce companions and friends.  She befriends the friendless and empowers the powerless.  She is one of those teachers you strive to meet her standards, because she hold the bar high and demands your achievement.

It’s obvious she’s a great witch of power.  I met her during a healing journey.  She was fierce, strong, and in good fighting shape.  She gave me strong words of wisdom for my protection and healing.  I’m working through a lot of uncertainty and sorrow at this point in my life, and she made it clear that she was at my back.  She joked about the chicken legged house, saying a lot of disruption and noise is not a bad thing.  She changed her visage from kindly old crone, to girl, to hot chick and back to fearsome hag before me; and then told me people see what they need to see where she is concerned.  She gave me some advice about some of my struggles and then said “I leave that with you to do or not do.”  Then she gave me a very fierce hug and was off again.

Baba Yaga
I am the wild, untamed nature of the world
I am the whirling music of nature
And the strange heartbeat
Of life and death.
I fly the world in my vessel of change
Propelled by creation and destruction.
I sweep from this world to the others
Clearing and cleansing the way.
I am in love with the unusual
Finding beauty and interest in the odd.
Wonder and curiosity move me
From marvel to marvel.
Shift your vision and you will see it too!

May the paralysis you feel about certain things be melted in glee, delight, and fierce determination