Happy Valentine's Day to the Love of My Life

For those of you scratching your heads, and thinking, "Wait--there's a man in Deborah's life?" No, you haven't missed anything :-) I have, in fact, had two guys I would consider the two great romantic loves of my life. One of them has been dead for over 30 years, and the other is alive and well and living in Maine, and we're still friends. And while I haven't completely given up hope of finding lucky number three, so far guys who want to spend their lives with a back-country witch with five cats and a tendency to spend most of her time writing are pretty thin on the ground. Shocking, I know.

The great love of my life was really this woman: 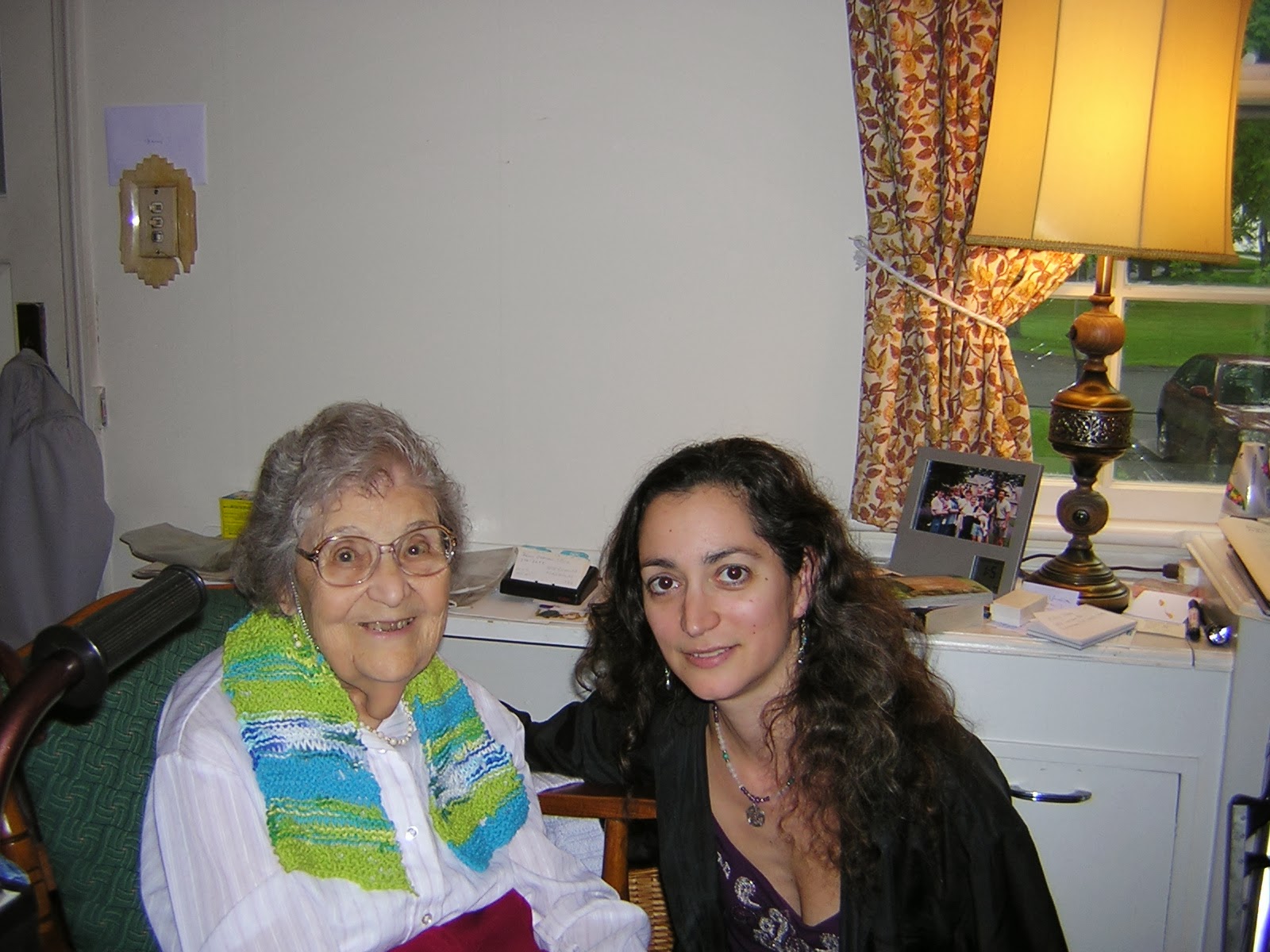 That's my grandmother, Jeanette, fondly referred to for many years as Germambie (due to my inability as a child to say "Ger...andma") and then later called GG, short for Great-grandma, once my sisters had kids.

She was not just my greatest supporter and cheerleader, but also an amazing example of what one person can do with a "regular" life if she has enough determination. (Mind you, both my parents are great examples of that too.) She was a concert pianist in her youth, and a master weaver later in life. She married my grandfather, who was the love of her life in a romantic story against her father's wishes, and stayed by his side until he died of cancer in 1976. After that, although she missed him, she also gloried in living her life her way; she was a vegetarian, a life-long learner, and woke up every morning excited to see what the day might hold.

She died, a couple months shy of her 100th birthday, three years ago today. Thanks, Germambie...like Valentine's Day didn't suck enough for me already? (Snort.) In the end, I find that somehow fitting, because she was the personification of love for her family, all of whom adored her. One of the interesting things that we discovered after she died was that just about everyone had the feeling that they were her favorite. I know she was certainly mine. 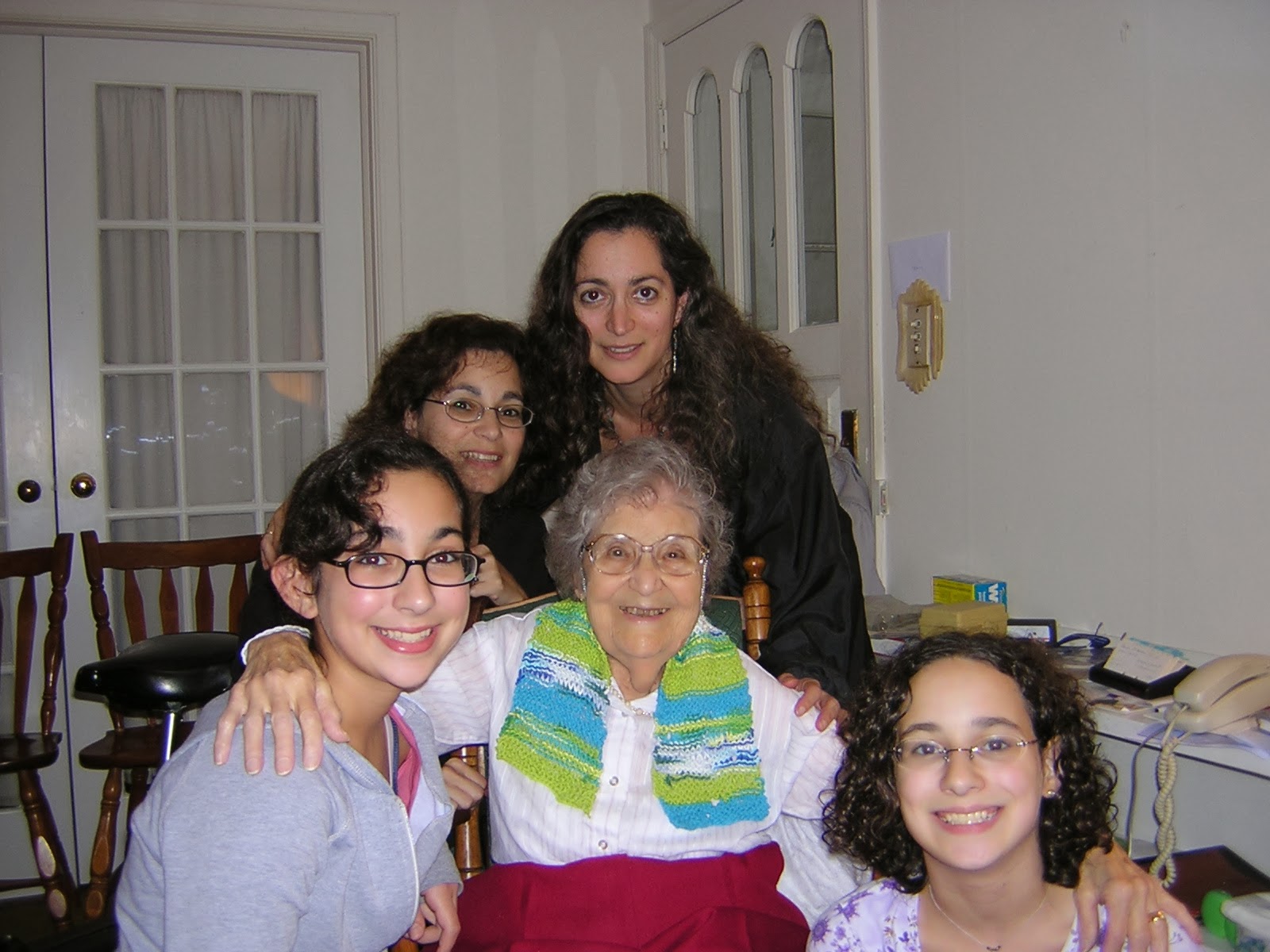 That's one of the last pictures we took of her in her home in Schenectady, before she headed out to San Diego to live closer to my parents when she was 96. (And still driving, and doing her own shoveling, if my brother in-law didn't get over there soon enough to stop her. Did I  mention that she was a little stubborn?) That's me in the back, of course, next to my sister Sarah (whose own home is a block and a half away from where my grandmother used to live--a decision she and her husband Rich made on purpose, both so they could be around to help, and so their kids could grow up close to her). My niece Bri is on the left, and Addy (who had just made the funky scarf GG is wearing) is on the right.

I hope that on this Valentine's Day you have someone--romantic or not--to be one of the great loves of your life. If not, I'll loan you GG; she had enough love for everyone.

And for those of you who complain when I skip Feline Friday, here are the current loves of my lives, in all their furry glory. 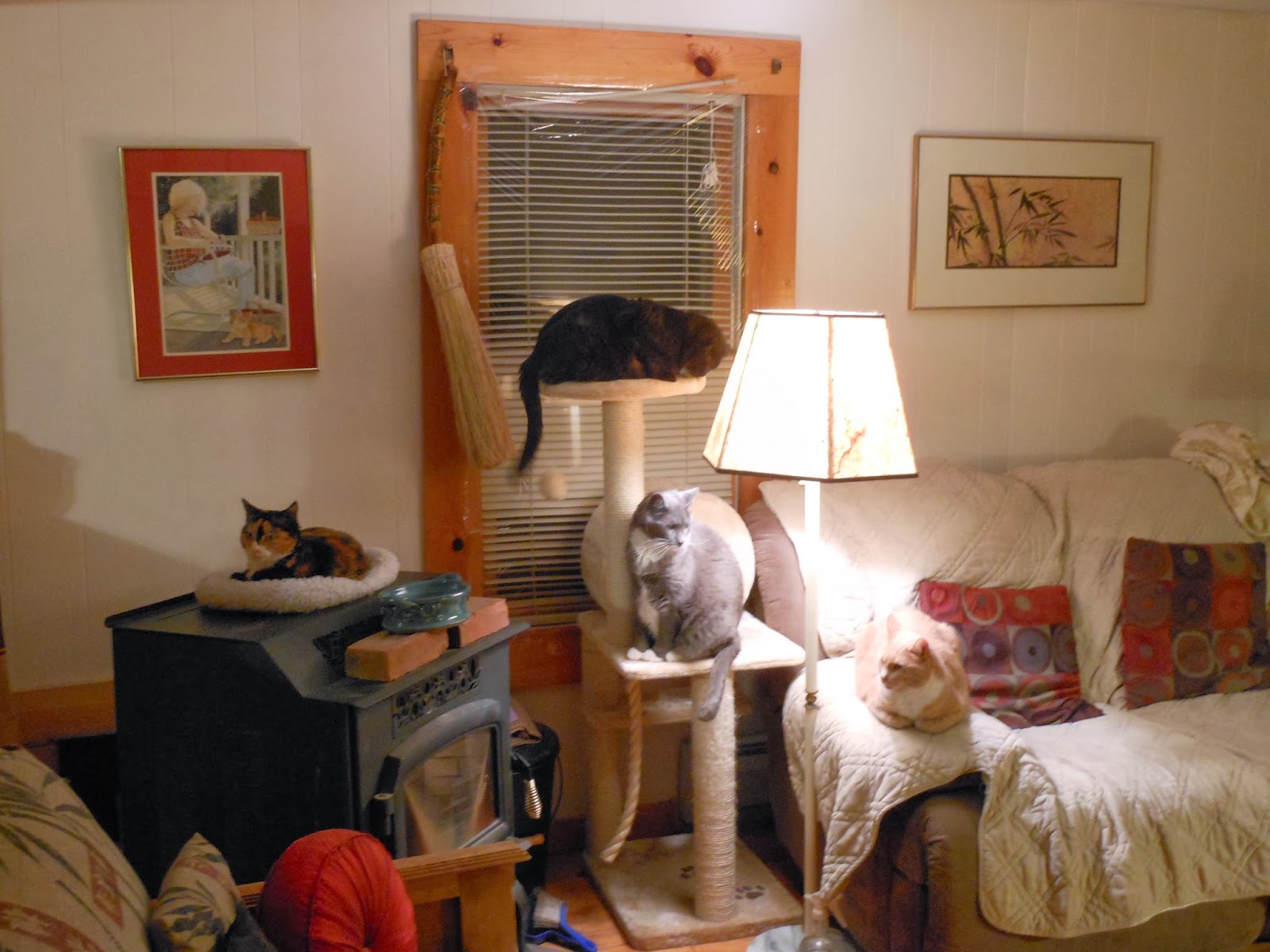 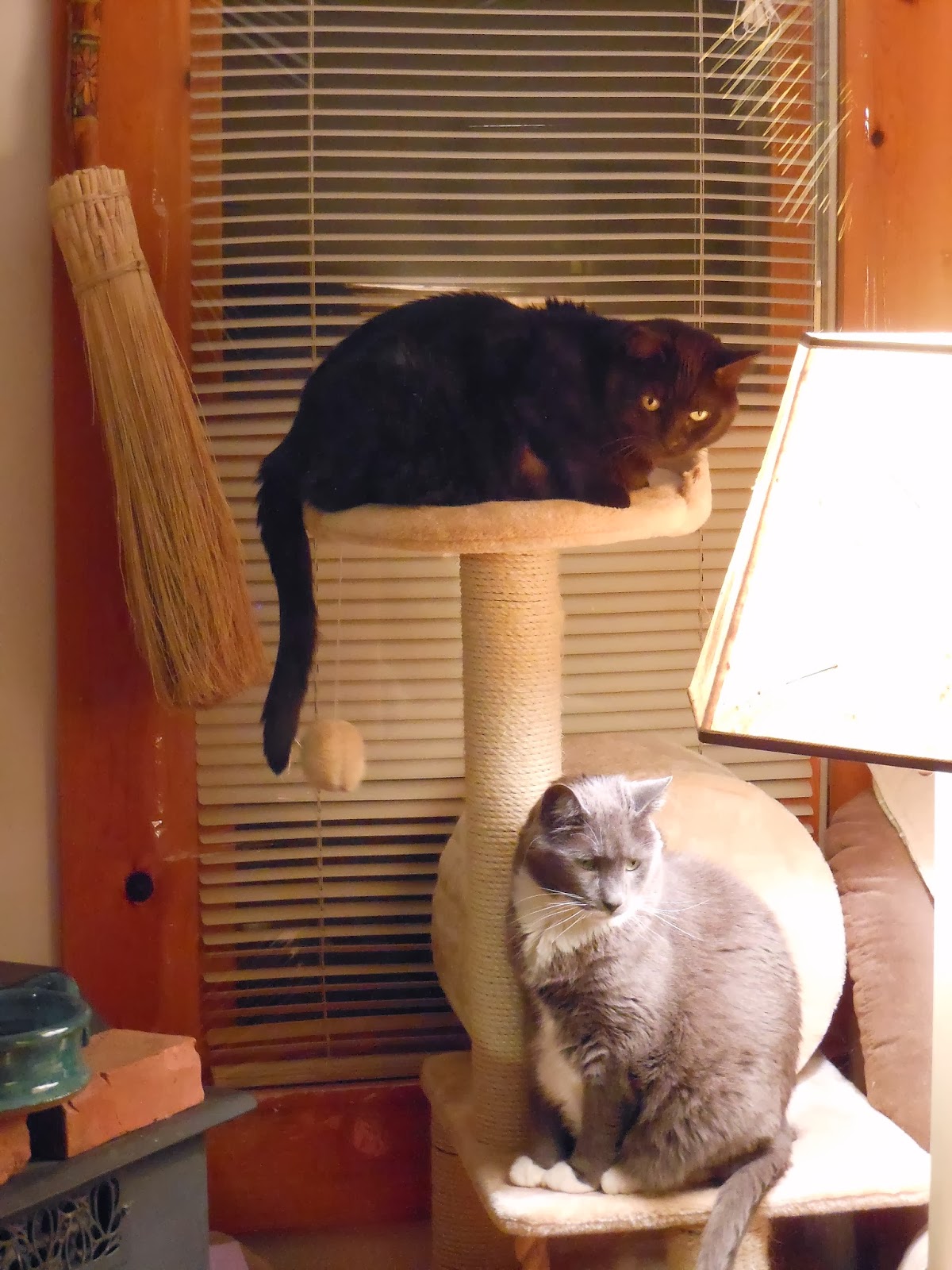 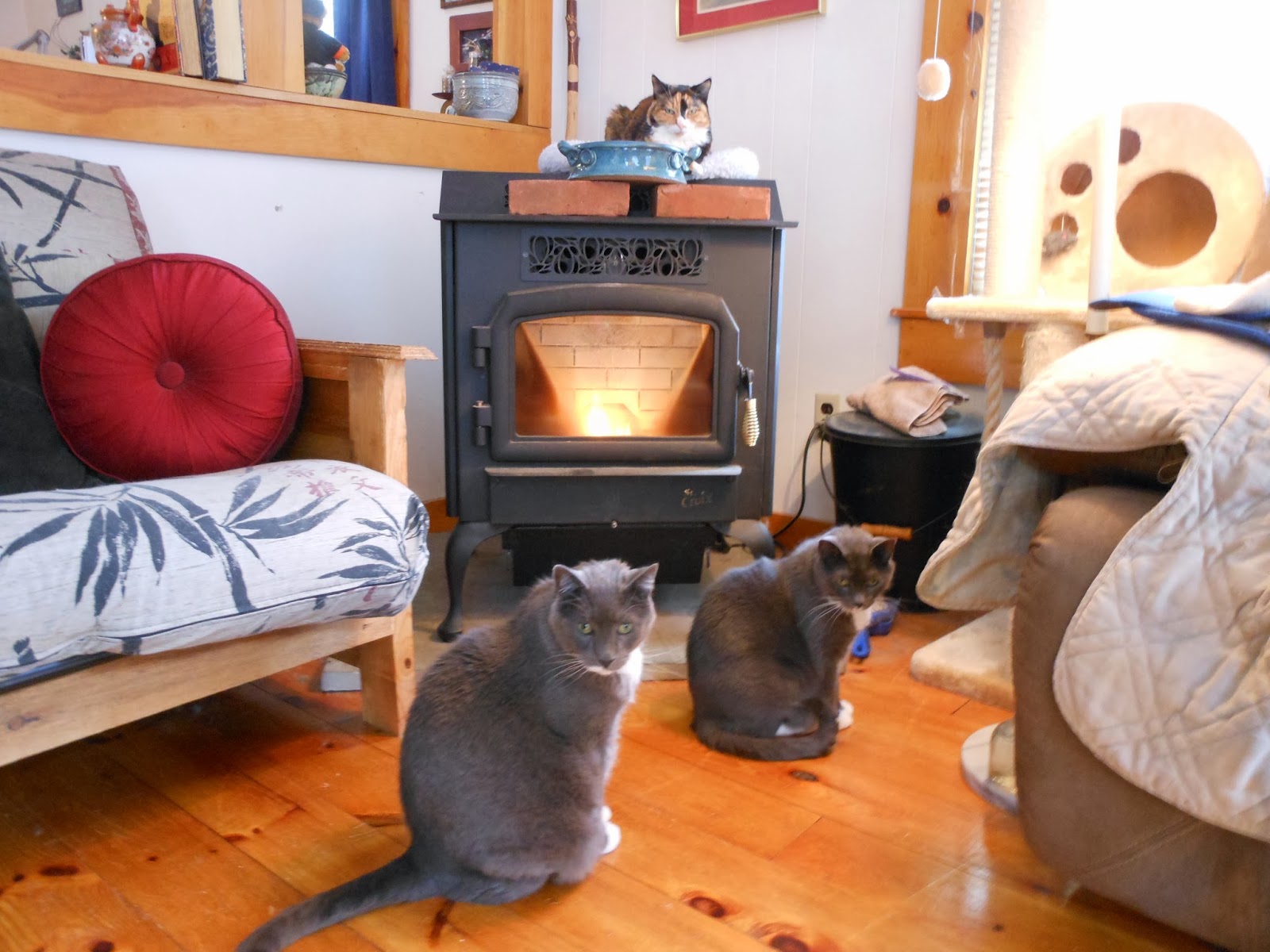 By the way...stay tuned because early next week, I'm going to have another swag giveaway! Which do you think I should do next--mug or notebook? And who is the greatest love of your life?
Posted by Deborah Blake at 8:52 AM