Feline Friday: The "What's With the Weird-Looking Cat?" Version

If you were around earlier this week, you already know that I have taken in a new lodger--my step-daughter's Mali Uromastyx lizard (who in theory will eventually be going out to California to live with her, if we can figure out how to get it there).

Initially, I put Babylon's large terrarium on the counter downstairs between the living room and the dining room. There were a couple of problems with this arrangement. First of all, the counter is fairly high, which meant that every time I needed to get into the case (to add food, remove food, clean up waste, etc.) I had to stand on a chair. But also, there was this: 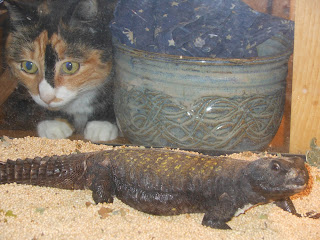 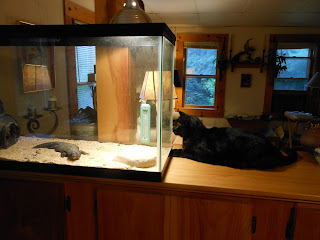 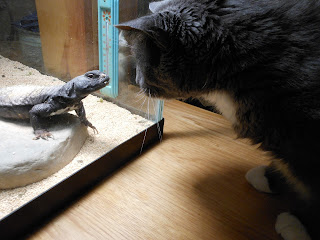 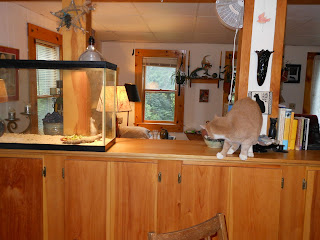 To say that my Feline Overlords were unhappy with this new, funny-looking cat would be a minor understatement. There was, at one point, hissing on both sides of the glass. Yes, they probably would have adjusted eventually and just learned to ignore him like they ignore me. (And Babylon has been living with cats, but apparently they aren't quite this interested in him.) And Angus, the little chicken, would have eventually stopped freaking out.

Still, it seemed both easier and kinder to everyone involved to move him upstairs to the "Crafts/Crap" room, which I was already in the process of clearing out and neatening. So for the record, I now officially have one "Cat Room" (technically the guest room/library, but really the room where Angus and Samhain stay when they're not downstairs with the rest of us) and one "Lizard Room." I think I may need a bigger house.

So--anyone out there have weird pets, weird rooms, or even weird(er) cats? Or know how to ship a lizard?

Posted by Deborah Blake at 8:45 AM

Email ThisBlogThis!Share to TwitterShare to FacebookShare to Pinterest
Labels: a day in the life, Babylon, cats, feline friday