Some of you may be deep into the writing rollercoaster ride from hell that is NANOWRIMO. If so, I hope it is going well! For those of you who aren't writers, NANOWRIMO is short for National Novel Writing Month--November, in which authors are challenged to write a 50K word novel (or a portion of one) in one month. Not impossible, but damned difficult.

I actually did NANO with my novel, Pentacle and Pentimentos, which eventually got me my agent Elaine Spencer. In theory, you're supposed to just sit and write the first draft with no editing along the way, but I can't write that way. Luckily, I had done a detailed outline first, so I still managed to finish.

This year, there was no way I was going to take on NANO, because I was already deep into the end stages of writing THE CURRENT NOVEL (I swear, I'll tell you the name soon). But one of the things I do when I am deep into the process is to write my daily word totals on my white board as a kind of running tally. I find that it really keeps me motivated. This is what the board looked like for the last of this novel: 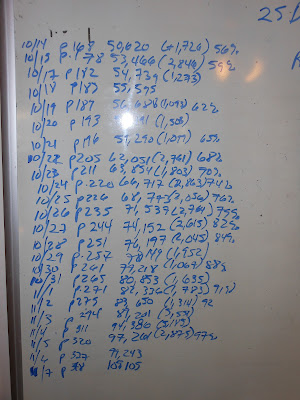 You can see (if you squint) that it includes the date, the page I'm on, the total word count so far, the number of words done that day, and the guestimate percentage of book done (I started out thinking the book was 90K long and it turned out to be 105K, so my guestimate was way off until near the end).

So I guess you could say I did NANO after all, kinda sorta by accident. *blinks* Mind you, the first half of the book took months, and went slower than usual, so there is that to balance out the gloating.

Now, of course, I still have to do edits based on the notes from my first readers, and the feedback from Elaine. But still, it was kind of cool to see what I'd done. What can I say? When the book decides it's coming out--it's coming out!

Who here is doing NANOWRIMO this year, and how is it going?

Posted by Deborah Blake at 8:45 AM

Email ThisBlogThis!Share to TwitterShare to FacebookShare to Pinterest
Labels: NaNoWriMo, The Current Book, the writer's life