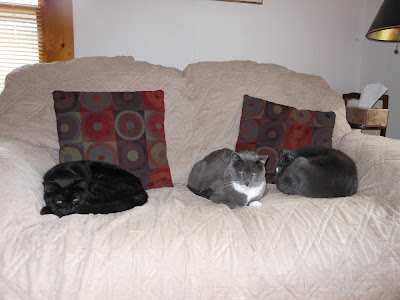 Magic, Mystic, and mom Minerva giving me the evil eye. They must have know I was going to take them to the vet on Wednesday for their yearly check-ups and shots. 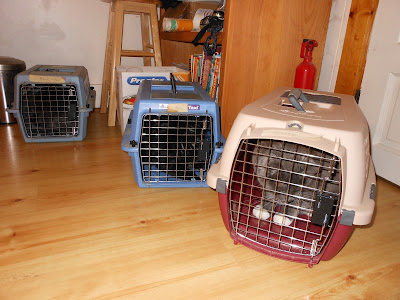 Three REALLY unhappy cats, ready to go. You'll note that Mystic has to have an extra large carrier :-)

In general, the visit went well, other than the yowling (them on the 15 minute trip there and back, and me, when I had to write the check) and the discovery that poor Mystic had a broken tooth and some tartar build-up that was causing gum irritation. The tooth doesn't seem to be bothering him much in general (it hasn't stopped him from eating!) but it clearly hurt when the vet pushed on it, and there is always a risk of infection. So in a week and a half, he gets to go back and get the tooth pulled. Cue the yowling.

In the meanwhile, though, everyone was pronounced healthy and looking great for their ages (10 for the "kittens" and 11 for mama). I'd reduced their food a smidge since they aren't as active, and everyone had lost a little weight and was now in perfect form. Mystic, who at his largest weighed over 18 lbs, is down to a svelte 14.8 -- and thankfully, the broken tooth is at the back of his mouth, so taking it out isn't going to ruin his stunning good looks. [And that also explains why I didn't notice it, before the vet pointed it out.] 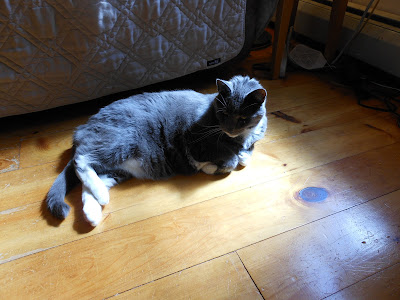 Now I just have to hope that people start doing some early holiday shopping at the Guild or My Etsy Shop, so I can pay for the $300 kitty dental bill. Sigh....

That's okay. They're worth it.

So what unexpected stuff cropped up for you this week?
Posted by Deborah Blake at 9:01 AM