Mother Nature: The Good, the Bad, and the Ugly

As a Pagan, I love Mother Nature. I love oceans and sunsets and the sounds of birds in the morning (except when they wake me up). Of course, living out in the country, nature sometimes can be challenging, like when my garden in invaded by woodchucks. Or deer. Or rabbits. You get the picture.

And I live in Upstate NY, where nature can just be perverse. For instance, this year, the ragweed, which normally kicks my butt from early August until mid-September, STILL isn't dead. We've had a few hard frosts, and even a smidge of snow, but it hasn't been enough to kill of that darned ragweed. *shakes fist at ragweed...and leaf mold, for good measure*

There's the good, which is most of it, really, like how beautiful it is here in the fall 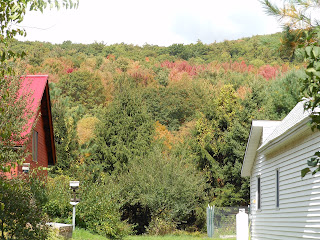 There's the bad, like what the salt they throw on the roads does to an otherwise perfectly good car 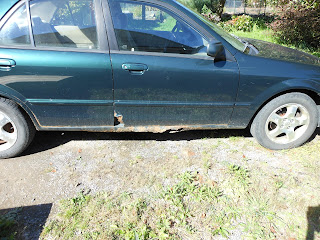 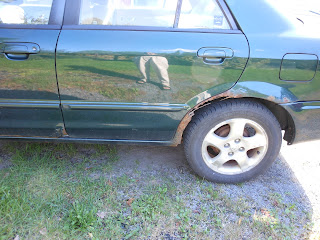 (Yes, that is the rust monster, eating away at my lovely Mazda Protege. Sigh. A big chunk of the underneath of the door just fell off the other day.)

And then there is the UGLY, like the sight that greeted me when I went through the mudroom on my way out to work first thing this morning 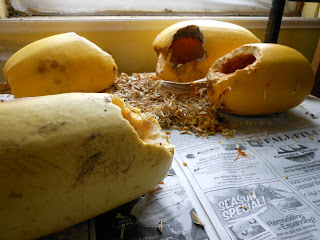 Those ugly things are all that remained of about 2/3rds of the beautiful spaghetti squashes I grew (slaved over!) this summer in my garden. I was planning to eat them most of the winter, but clearly, something beat me to it. I've been known to get mice in the mudroom (since the cats aren't allowed in there), but this was no mouse.Unless it was on steroids, and brought 25 of its best friends. I'm guessing a squirrel got in there somehow, although I haven't been able to figure out where the hole in the wall is. I sure as heck found the holes in the squash, though! Sadly, this is just the tip of the iceberg...there were probably 20+ squashes and I have 6 left. 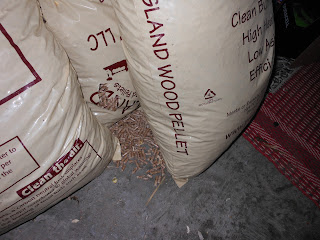 The critter, whatever it was, also gnawed a hole in my bags of pellets for the pellet stove, even though they aren't edible.