As most of you know, I have a particular fondness for stories about witches (good ones, usually, as opposed to the typical evil witch). If fact, many of my own novels feature witch characters of one sort or another. If you liked my book Witch Ever Way You Can and its follow-up short story Witch Upon a Star then you're going to love this collection of short stories about one of my favorite witch characters, the Firefly Witch.

If you've been around here for a while, then you've probably heard me talk about my author pal Alex Bledsoe, author of multitudinous grand and fabulous novels, including my favorites, the Eddie LaCrosse series. But what you may not know is that when he was starting out, Alex wrote a number of short stories about a character called the Firefly Witch, most of them published in the BBI Media magazine that predated the Witches & Pagans Magazine I write for today.

Luckily for those of us who missed them the first time around, Alex has put some of these stories out in eBook anthologies. Check it out: 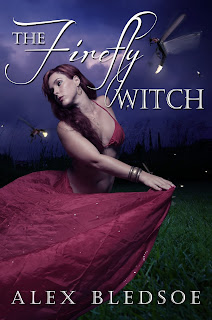 Don't you love that cover? This is the first anthology, in which you meet Tanna, a woman with very special gifts, and Ry Tully, the man who eventually becomes her husband.


In these three short stories a small-town reporter meets a beautiful witch who shows him how mysterious, and dangerous, the world can truly be.

When small-town reporter Ry Tully meets the woman of his dreams, he has no idea what he's getting into.

Tanna is blind, but when fireflies are around, she can see. She's a graduate student in parapsychology, and psychic herself. She's also a second-degree Wiccan priestess--a witch. And her primary duty is to help those in need, whether living, dead, or otherwise.

Will Ry be able to forge a relationship with a woman so different from anyone he's known? Will Tanna rise to the challenges of both her new love, and her chosen path? And will the dark corners of the world be ready for the Firefly Witch?

There are a couple more anthologies that follow this unusual couple through their increasingly unusual (and sometimes creepy) adventures. One of the things I love about these stories is the way they show Tanna and Ry's always-steady love for one another, no matter what comes.
Croaked (Firefly Witch Tales)
Back Atcha

I hope you'll go check them out. Alex is also putting up some very cool "Day in the Life of a Writer" videos up on his blog, which I'm really enjoying. Writer's Day #6 Alex Bledsoe 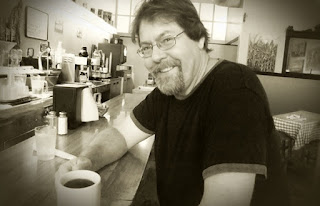 Have you read anything recently that you want to recommend? I'm in the middle of an early novel by Tanya Huff (author of the Blood Ties books, among others) called Summon the Keeper (there's a talking cat in it). Lots of fun.

And I'm thinking of doing my own private "Black Friday" sale here...I'll be working at The Artisans' Guild, of course, and not shopping, but I was thinking of doing a one-day sale on my jewelry. Either putting up a few things with slightly cheaper prices than usual, or adding a few items to Etsy and throwing in a signed copy of one of my books for anyone who spends over $75. What do you think? Silly idea?

Posted by Deborah Blake at 8:38 AM