I had this crazy thought that once I lost Magic and Mystic, I wouldn't have insane vet bills anymore. New young healthy kittens, I thought. One check-up, and we won't have to go to the vet until they're due for their rabies shots. I even considered not doing the Patreon anymore, since the vet bills for Magic and Mystic were what motivated me to start it in the first place.


Yes, that IS the universe you hear laughing. 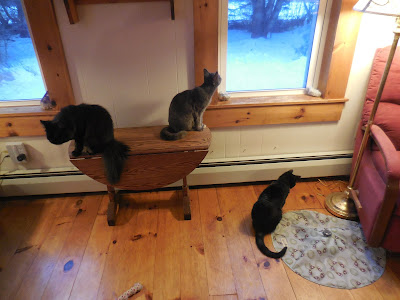 To begin with, their initial wellness check turned up roundworms (meds x 3) and an ear infection in Koshka (eardrops). Ka-ching! He had to go back the next week to check on the ears, and the drops hadn't worked, so then he had an antibiotic shot, and an appointment set for 3 weeks away. THEN poor Harry Dresden developed horrible liquid diarrhea (yeah, that was about as much fun to deal with as it sounds like), followed by Ember having the same thing plus throwing up and refusing to eat. So they both went off to the emergency vet last Saturday morning. (antibiotics and probiotics x 2, plus fluids, x-rays, and an anti-nausea shot for Ember). KA-CHING!
The good news is that they're both feeling better. The bad news is that this Wednesday morning, Koshka had liquid diarrhea (don't you love coming to my page to read this stuff?) and wouldn't eat. So he had to go to the vet too. He is obviously dealing with the same thing, whatever it is, and also had to have fluids and an anti-nausea shot, plus his own antibiotics (metronidazole, which is specifically used for bowel issues). My vet says it could be a result of the roundworms (they can cause this kind of issue, but so can the die-off after the dewormer, so who knows), or it could be a virus, or some other thing that one or the other of them brought into the house from their previous situations. Basically, all we can do is treat the symptoms and hope that poor Angus doesn't come down with whatever it is! (Hopefully not--he's older and his system hasn't been under the kind of stress that theirs has.)

That's right, the new "healthy" kittens have now been to the vet 4 times in 2 1/2 weeks, with another trip scheduled for Koshka's ears next week. At least they all seem to be feeling better.

Thank goodness for my patreon peeps, because they're saving my butt. And a bunch of furry butts too.
Posted by Deborah Blake at 2:54 PM