I'm afraid this is a rather sad Feline Friday post. As some of you know (the ones who follow me on Facebook), I had to say goodbye to my beloved cat Minerva this Tuesday. She'd had a bad week back in January I blogged about it here, but it looked like it was just a fluke, and she was fine. Unfortunately, the issue returned after I got back from Coastal Magic on February 7th (I'm still going to put up a blog about that eventually, probably) and we've been fighting the good fight ever since. On Tuesday, we lost the battle.

We still don't know for sure what went wrong, but it was likely to be some form of cancer, since all her blood tests and x-rays were fine, but she went downhill incredibly fast. She initially responded well to prednisone, but then even that stopped working and she wouldn't eat. It broke my heart, but we had a good last couple of days on Sunday and Monday (when I was already pretty sure we were at the end) and when I took her in on Tuesday, my vet and the techs and everyone were just wonderful. I miss her terribly, but it was the right thing to do to end her suffering. I put up this altar for her in the last week, and then added her picture once she was gone. 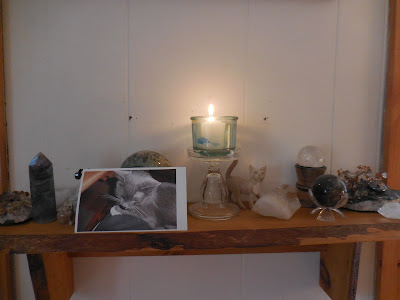 I'm not the only one missing her. I ended up adopting Minerva more or less by accident. I'd gone to the shelter to get one kitten (I swear!) to be company for the final elderly cat I had left at the time, and ended up coming home with Mystic, his sister Magic (she insisted, and that was just the first of many times she twisted me around her little paw) and their scared, sickly mother. The folks at the shelter offered to throw her in as a "bonus," without any of the usual adoption charges, because they could see that she was unadoptable. She was so frightened, it took her two years before she got brave enough to sit on my lap. Of course, then she never wanted to get off. I called her my little bonus cat.

Mystic and Magic are clearly aware that she isn't coming back, although how they know, I'm not sure. (When she was hospitalized for two days back in January, they were just fine.) Mystic isn't finishing his food--that never happens!--and Magic has been a bit clingy. But we'll hang together and get through this.

It is my very great consolation that I was able to give her fourteen years of a good life she wouldn't have had otherwise: a loving home where she could feel safe and stay with two of her kittens (she was a very affectionate and attached mother, which not all cats are). March 8th would have been the anniversary of the day I brought her and the kittens home. It has always been a joyous day in this house, but this year the house will be a little bit emptier.


This is the tough part about having animal companions, of course, and it hurts like hell. But I can't imagine my life without them and the joy and love they bring to my life.

Thank you, Minerva, for being my little bonus kitty. I miss you.

Posted by Deborah Blake at 8:46 PM