A Belated Weekend Report with Pictures

I meant to post this on Monday, but, well, MONDAY.

This was my weekend:
SATURDAY

I did some spring cleaning, including moving the Minerva altar from the living room to the bedroom (I have altar shelves in both rooms, and the living room one tends to be focused on whatever is going on right now--often whichever book I'm working on--and I thought that since Minerva spent most of her time in the bedroom, she'd rather be there) and changing the comforter cover from the winter one to the spring one. This was actually a pretty emotional endeavor, because it meant washing the last of Minerva's fur and smell off of the other comforter cover. On the other hand, it really needed washing, because the last weeks of her life she had been spitting medicine all over it. (She was NOT happy about taking meds.)
Here's the altar now--that little wooden box with her picture on top of it has her ashes in it. A lovely sympathy card from my friend Karen Rose Smith is to the left. 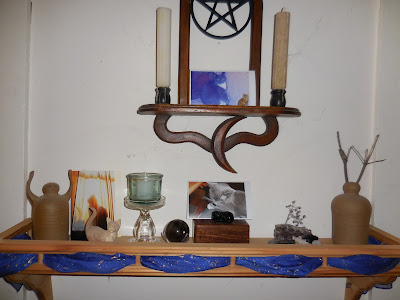 Here is the gorgeous spring comforter (which was made especially for me, along with the wall hanging above it, by one of the artists at The Artisans' Guild) 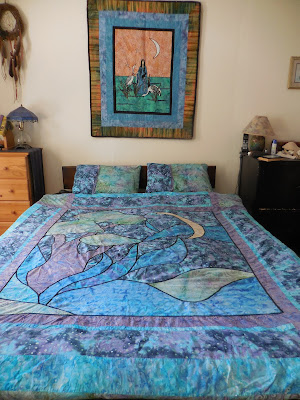 The same bed, with cats a few hours later. If you look closely at Angus, the yellow cat, you can see that he is holding his right eye partially closed. He has something going on with it--probably viral, and returned from an occurrence a month ago--and I have to put antibiotic ointment in it twice a day. You can imagine how well THAT'S going. 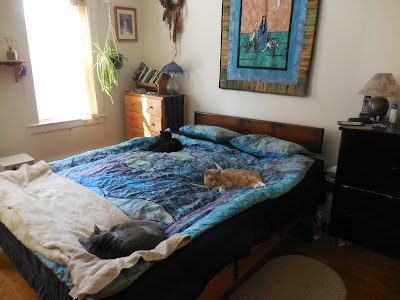 Lest you think these guys are the only ones getting attention, I also spent some time playing with Luna. I need to do a post about her soon--did you realize I've had her for over a year? 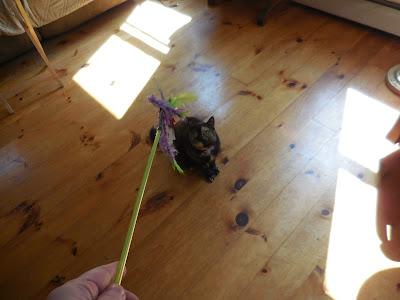 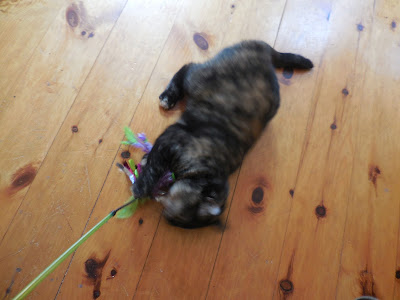 I know the pictures are a little blurry...she rarely stops moving!

On Sunday, my friends Ellen and Chris and I had a small birthday celebration for Jo, my step-daughter's mom. Some of you may be aware that Jo, as well as being sort-of family, came to Blue Moon Circle rituals for a couple of years before she had a massive heart attack a little more than a year ago. To be honest, no one expected her to be celebrating this birthday (she's since had another smaller heart attack, open-heart bypass surgery, and is in her 11th year of dialysis), but she's tougher than she looks. Or more stubborn. Either way, we broke her out of the nursing home for a few hours so we could celebrate her turning 54. She had a great time.

Of course, in with all of the cleaning and partying, I also did a lot of writing. Here's a picture from Saturday evening of Magic helping me.


So tell me, what did you do last weekend? Anything interesting planned for the one ahead?