As requested, THAT scene. 18 and up only, please. 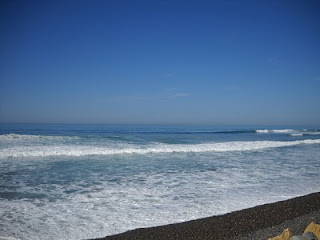 
She walked down to the ocean and lay down in the surf; half in and half out of the water as if caught between the land and the sea. The waves curled between her thighs and slid up to caress her breasts, tender and salty like a lover’s tears.
It was as if she was drawn to a magical place outside of space and time.There was no fear. There were no questions. Only the waves, and her.
The water should have been cold, but felt as warm as a living man would; touching strongly but gently, ebbing and flowing with a passionate embrace. The waves kissed the delicate flesh between her legs, easing in and out to mingle with her own dewy fluids.
It was as if she was filled with the perfectly fitting flesh of a lover who had been formed by the sea just for her pleasure. And that pleasure grew until her body could no longer contain it. Still held by a strange calm, the liquid clamax seemed to go on and on—at once overwhelmingly intense and oddly distant.
Her whole being seemed to suffuse with a feeling of serene well-being, and she could feel herself melt into the sand, into the ocean, into the sky.
For a moment, she thought she saw a glimpse of something above her, as if the full moon overhead had glinted, just for a moment, off soft green eyes and white teeth shining in a satisfied smile. And then there were just the waves, softly stroking, and murmuring her name. Donata. Donata. Donata.
Posted by Deborah Blake at 8:02 PM