It’s release day for Veiled Enchantments, the last book in the Veiled Magic series!
This day has been a long time coming. Veiled Magic, the first book in the series, was actually the third novel I wrote and the one that got me my wonderful agent, Elaine Spencer. (It was based on an award-winning short story I wrote for The Pagan Anthology of Short Fiction.) It was originally called Pentacles and Pentimentos. She loved it so much, she had me go ahead and write the second one, which ended up being Veiled Menace.
And then we couldn’t sell it. So I put it away and wrote some other things, and then eventually we sold the Baba Yaga series to Berkley, and even more eventually, Berkley decided that they’d put the Veiled Magic books out as eBooks, and I finally got to share some of my favorite books with the world. All that time ago, I had written up a page of notes about book three, and hoped to write it someday.
And look, here we are! I’m so happy to be able to share this third book in the trilogy with you, so you can all find out how Donata’s story ends up. I hope you love it as much as I do. 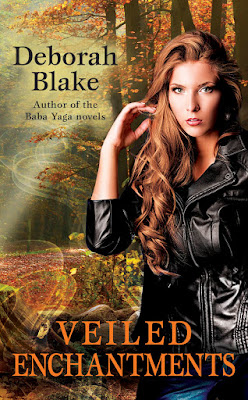 In this exciting novel in the Veiled Magic series, Witch and police officer Donata Santori travels to Maine to help solve a deadly mystery, where her magical abilities are tested like never before.

Still reeling from her unwitting involvement in murder and subsequent break up with a half-Dragon art forger, Witch-cop Donata Santori is grateful for the distraction when her ex-lover requests her help. Not only are Magnus's beloved dead suddenly haunting the Ulfhednar shapechangers in his tiny rural hometown in Maine, their patron god Odin has turned his back on them, and the members of their once tight-knit enclave are at each other's throats. Literally.

Magnus is relying on Donata's experience in dealing with the gods, along with her magical ability to summon the dead, to help him unravel this mystery in time to save his clan. Donata only hopes to survive the ordeal so she can return home to the city and her quiet job at the precinct.

But first, she must discover who or what is behind the terrible attacks on the Ulfhednar. And the clock is ticking, in more ways than one...