I've been working on a sekrit project for ages with my friend, author Mindy Klasky. Mindy approached me with the idea when we were both at the RWA National Convention in NYC last July, so I have kept this under my hat for a LONG time! Today, we finally get to share! 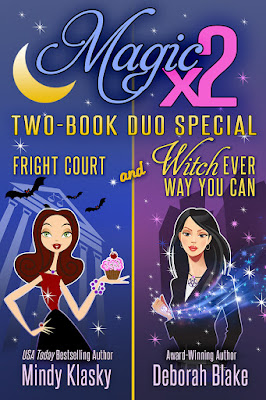 Magic Times Two: Two Books for the Price of One!


In Mindy Klasky’s Fright Court, Sarah Anderson has found her dream job: Clerk of Court for the District of Columbia Night Court.  Dream job, that is, until she’s attacked in the open courtroom by a vampire defendant.  And until she’s forced to take self-defense lessons from her boss, the enigmatic vampire James Morton.  And until she learns she can’t share the truth about any of that with her best friend, Allison Ward – even over delectable cupcakes from the Cake Walk bakery. Soon, Sarah is surrounded by vampires, griffins, and sprites – all members of a secret supernatural court.  And when a deceptively easy-going reporter starts to ask questions, Sarah wonders just what answers she is supposed to give…. Will Sarah be able to create order in the court?

In Deborah Blake’s Witch Ever Way You Can, Deirdre Connelly is a modern witch who accidentally becomes the reluctant guardian for the Star Stone, an ancient mystical crystal. With the aid of handsome actor Robert Daniel Addison and a mysterious spiritual guide, Deirdre uses magic, ingenuity, and determination to fight a deranged billionaire for possession of the Star Stone and its power.*

Magic Times Two will be in stores on August 18. Between now and then, keep an eye out for giveaways from both me and Mindy, plus one BIG joint giveaway on launch day!

*Those of you who have been with me since the beginning may recognize this title. It is my first novel, which I briefly had out on its own but took down when the Baba Yaga series came out. Since many of you have asked about it, I decided to release it again, in this special form!

Posted by Deborah Blake at 5:28 PM