When I was in Cape Cod recently with my extended family, we did a rainy day shopping blitz and one of the things I picked up was a fun dish towel with a mermaid on it, because it reminded me of the mermaids in WICKEDLY WONDERFUL, the second novel in the Baba Yaga series.

Which in turn reminded me that I'd promised to give away the cool lapis mermaid necklace I'd made in honor of the book. Do you remember this?


And here's the fun towel:
But of course, I'd need to have an excuse for the giveaway. You know, something to celebrate and shout about. Luckily, just as I was thinking that, my lovely editor Leis emailed me with the final cover for WICKEDLY EVER AFTER, the next novella in the series. The third book, WICKEDLY POWERFUL won't be out until February 2nd, 2016 (don't worry, that's closer than you think) but the novella will be out a few weeks earlier, on January 16th! (And yes, since you asked, they are both available for pre-order now. You're welcome.)

I had a blast writing Wickedly Ever After, because it let me visit my first (and favorite) of the Baba Yagas, Barbara, and check in to see what was happening with her and Liam and little Babs. Of course, things aren't going quite as smoothly as she'd hoped...

Here's the blurb for the story:

Having triumphed over a powerful enemy and ended up with both a wonderful guy—Sheriff Liam McClellan—and an adorable adopted daughter to raise as a Baba Yaga, Barbara Yager is ready to welcome her happily ever after. But first she must bring Liam to the Otherworld and get the Queen’s permission to marry him. The Queen, however, is not so easily persuaded. She gives them three impossible tasks to complete in two weeks’ time—and if they fail Barbara will have to watch Liam slowly age and die like all humans, and kiss her happily ever after good-bye forever.

And here's the COVER REVEAL!!! 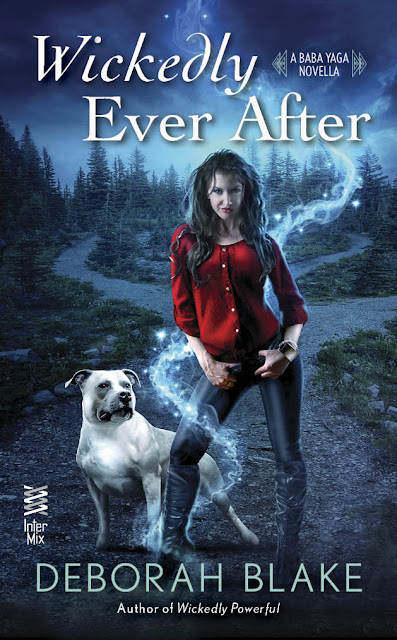 I love that it shows a bit of Barbara's attitude, because goodness knows, she's got plenty of that!

Now, here's the giveaway I promised you! Tell me, what do you think of the cover? Are you looking forward to the novella? The novel? Both?

Addendum: Yes, this one is open to everyone, international too!