It has been a long, long wait but today is the day—WICKEDLY MAGICAL is finally here! 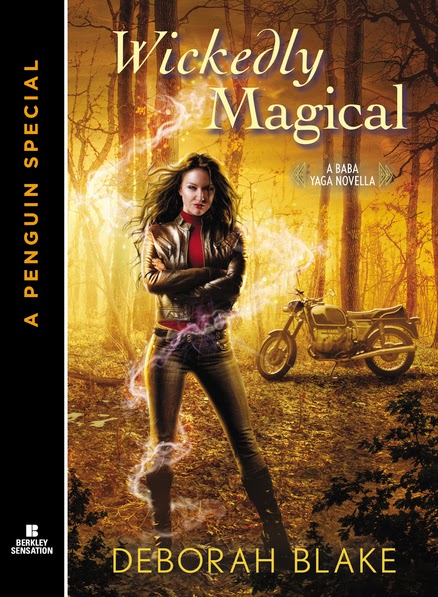 WICKEDLY MAGICAL is the prequel novella for the Baba Yaga series, which means it tells a little bit of the “story before the story starts.” You don’t need to read it in order to enjoy the novels, but it does give you that first glimpse into the world of Barbara Yager (the first Baba Yaga) and her sisters.

Known as the wicked witch of Russian fairy tales, Baba Yaga is not one woman, but rather a title carried by a chosen few. They keep the balance of nature and guard the borders of our world, but don’t make the mistake of crossing one…

Barbara Yager loves being one of the most powerful witches in the world, but sometimes she’d rather kick back in her enchanted Airstream with a beer in her hand than work out how to grant the requests of the worthy few who seek her out.

But when a man appears with the token of a family debt of honor, Barbara must drop everything to satisfy the promise owed by her predecessor—and she isn’t above being a little wicked to make sure the debt is paid in full…

Here are a few links, in case you are in the mood to take a look (and don't worry if you don't have an eReader; you can get a free and easy Kindle app that will let you read on your computer).
PENGUIN

And don’t forget, WICKEDLY DANGEROUS (Baba Yaga novel #1) is out on September 2nd and it’s up for pre-order now! And if you get a copy of WICKEDLY MAGICAL, be sure to come tell me (on the blog, or Twitter, or Facebook) what you thought. Spread the word, if you are so inclined--you know I appreciate it! In fact, I'm giving away a Big Bundle of Baba Yaga Swag to one random fan. You can enter the contest here AND/or on Facebook. (But it only runs until the end of Wednesday, so don't wait.)
a Rafflecopter giveaway

Welcome to the world of the Baba Yagas!
Here's an excerpt to tempt you....

Barbara Yager glided her classic BMW motorcycle to a halt in front of the silver Airstream trailer that she lived in whenever she was on the road. It was currently parked in a lot on the campus of the Northern Illinois University where she was presenting a series of guest lectures on wild crafting herbs. Traveling botanist and college professor made for a useful cover for her other activities, which tended to be a little less conventional. To say the least.

As she swung one lean, leather-clad leg over the saddle of the bike, she caught a glimpse of something curious, reflected in the shiny royal blue paint. The reflection should have been impossible, given the angle, but like everything else about Barbara Yager, the motorcycle was not quite what it seemed.

“Hmph,” she said, not very loudly, and strolled over to the front door of the Airstream without looking back.

“We have company,” she said as she closed the door behind her. “Again.”

She removed her helmet, releasing a cloud of dark hair that flowed over her shoulders like silk. The helmet and black leather jacket were hung on branch-like pegs that sprouted out of the wall as she snapped her fingers, leaving her clad in matching black leather pants and a crimson tee. Not what the university administrators had been expecting, she suspected, but she didn’t much care. Following the rules had never been her strong suit.

A blunt black-nosed snout pushed aside the velvet curtain covering the window, as Chudo-Yudo looked for himself. He gave a barking laugh, one that went well with his current guise as a huge white pit pull; not exactly subtle, but a lot easier to explain than his true form of a ten-foot dragon. They’d been companions since she’d been a child…which was a lot longer ago than one would suppose based on appearances.

“Not very smart,” Chudo-Yudo growled. “Stalking a Baba Yaga.” He showed a set of sharp white teeth. “Maybe he has a death wish. I could help with that. You want me to eat him?”

Barbara rolled her eyes. “I don’t think that will be necessary. It is not as though he is a threat.”
As if an ordinary mortal could harm a Baba Yaga in a face-to-face confrontation. Barbara was one of the three Babas currently living in—and responsible for—the United States. Like the others, she’d been trained in magic by the Baba Yaga who’d preceded her, and like the others, she was tasked with guarding the doorway to the Otherworld, keeping the balance of nature (as much as anyone could in these modern times), and occasionally, helping a worthy seeker.
That last one was a pain in the butt.

Barbara sighed, peering out the window over Chudo-Yudo’s massive furry shoulder at the rusting blue pickup truck parked under a nearby tree. For three days, it had followed her from the building where her class was held. Each day, it sat there, idling, for about twenty minutes, no doubt while its driver attempted to work up his nerve to confront one of the most powerful witches on the planet. Each day, it drove off again, the man inside only a vague image of ragged hair and bowed shoulders, leaving behind it a miasma of exhaust and sorrow.

Barbara was tired of waiting. In theory, those seeking her assistance were supposed to come to her. She decided that parking within twenty feet of her home was close enough to count. There was a cold beer with her name on it (literally, since a small organic brewery in Utah made a beer called “Baba” that she was quite fond of), and she wasn’t going to be able to relax until she figured out if she was truly needed, or if whoever was out there was just wasting her time and annoying her. It was never a good idea to annoy a Baba Yaga. Particularly not this Baba.

Muttering under her breath, she stomped over to stand in front of the driver’s side door, arms crossed, booted feet planted firmly on the ground. Chudo-Yudo trailed along behind her, probably out of sheer boredom. They tended to spend more time away from civilization than in it, which made it easier for him to be out and about, and a week stuck in the Airstream in the middle of a parking lot had made the dog-dragon even grumpier than usual.

The window lowered slowly, revealing a pale, rugged face under badly cut brown hair. Baba thought the man might have been reasonably attractive when he didn’t look so tired and worried. The lines of strain had carved crevices and valleys onto an otherwise pleasant landscape, and dark brown eyes were ringed by shadows that spoke of many a sleepless night.
Barbara hardened her heart. Just because someone wasn’t sleeping well didn’t mean he merited her assistance. Maybe the guy had a guilty conscience. Or stayed up all night gambling and chasing women.

She hoped he hadn’t come to her in search of some kind of magical treasure to get him out of debt. That might have worked on occasion in the old days, back in the dark green, mysterious forests of Mother Russia, when Baba Yagas were more inclined to play along with the fairy tales people told about them. Not anymore, and definitely not her. He was going to have to really need her help, or she’d turn him into a toad and go drink that beer.

“Hey,” she said, possibly a touch more forcefully than she’d intended to, based on the way the guy flinched. “I’m guessing you wanted to talk to me, since you’ve followed me back here three days in a row. Were you ever planning to get out of that truck?”

The man eyed her dubiously, and looked even less encouraged by the sight of the large canine sitting at her feet, long pink tongue lolling, and just a hint of steam curling out of his nostrils. But after a minute the man shut off the engine and opened the door. For all his hesitation, once he was in front of her, he straightened up and pulled his shoulders back, as if gathering his courage. A couple of inches over her five foot ten, he wore a clean blue shirt over jeans that actually looked like they’d been ironed. One hand gripped a small box.

Barbara raised a dark eyebrow, but didn’t say anything. She’d gone as far as she was going to—the next step was up to him.