A bunch of years ago, I found a starving half-feral cat in my driveway one cold February. I ended up taking her in and she hid out in my upstairs room for six months, gradually becoming more socialized. Six months later, she died suddenly of renal failure. The vet said she'd been dying the whole time and I just didn't know it. I believe the gods sent her to me so that she would have a safe and warm place to live out the rest of her life. This sounds like a sad story, but really, it wasn't.

Because a year later, I decided that (despite having Magic, Mystic, and Minerva) I was really missing my little Melisande. So I decided to adopt a cat from a shelter in her honor--to save another kitty the way I couldn't save her. I went online to Petfinder which is a wonderful organization that takes pets that need to be adopted (both dogs and cats) and puts up their pictures and info so that their prospective people can find them. You put in your zip code, and all the animals up for adoption at shelters in your area come up. Then you can narrow it down by searching for "cat" and age, or male/female, or color, or breed. They give a brief description as well.

For instance, when I did a search for my area, this beautiful girl turned up.Kitty  NOT LOOKING AT HER. Magic, stop growling.

Anyway, I did a search for an orange cat, since I'd had a couple of brothers years ago that I adored, and this is who I found 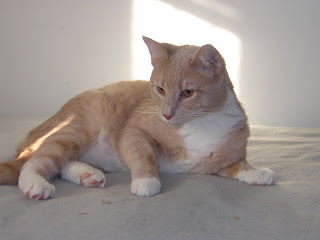 That little foxy face captured my heart right away, so I went to the Delhi Shelter (Heart of the Catskills) to see him in person. At the time he was named Tweed. Don't ask me why. The folks at the shelter told me that he was 7 months old and he'd been there since he was 7 weeks old. And that he hadn't been adopted because he was so shy, he wouldn't come anywhere near the people who came to look at him.

As it turns out, Angus (aka Tweed) isn't shy at all. He's twitchy as all hell, so if you move too fast, you scare him and he runs away. Yes, even now, after all these years. Idjit. But I went and sat in the room where he lived with about 20 other cats, and he came right up and started purring louder than any cat I'd ever met. Huzzah, I thought. That was easy.

Because then this tiny little calico girl came sauntering up to see me. Only about 7 pounds of bright eyes and attitude, "Azella" was just adorable. She was a stray--they thought about 3 or 4 years old, and she'd been there for a year without being adopted. Look at this face: 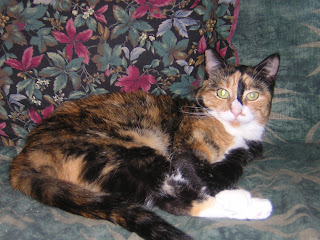 But I was determined to only get ONE CAT. After all, four cats is really the limit. You hit five, and they start calling you a crazy cat lady...

So I went back three times, determined to make up  my mind between them. The last time, I gave up and said, "Okay, I'm leaving it up to the gods. Whichever cat sits on my lap, that's the one that's going home with me." I went into the room and sat down on the floor and Tweed came right up and sat on my lap. Fine. He was the one I found on Petfinder in the first place. Only then he got up, and little Azella came and sat down on my lap. Not one of the other cats in the room came anywhere near me.

Never let it be said that I can't take a damned hint. 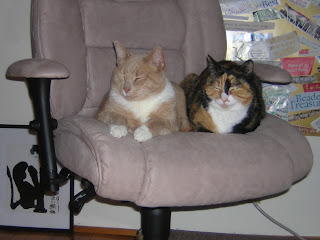 Seven years later, here they are, Angus and Samhain. I think they look pretty happy, don't you? I know I am.

You can check out some other cool I Am a Cat Parent stories on Petfinder. And if you have a fun story about how you got your cat, feel free to share it here.