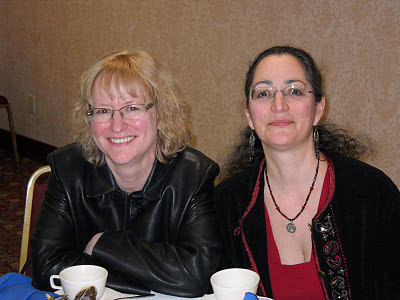 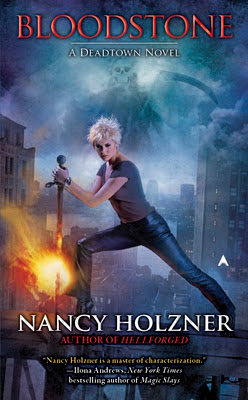 Recently, I had the pleasure of spending the day with author pal Nancy Holzner, when we went to a writers' workshop together. Nancy lives in Ithaca, which is a couple of hours from me, and we try to get together a couple of times a year to talk writing and catch up with eachother's lives.

Nancy and I originally "met" online, after I reviewed a copy of her first book, DEADTOWN and loved it. I recently got to read the third book in the series, and I have to tell you, they just get better all the time.
“They call it Deadtown: the city’s quarantined section for its inhuman and undead residents. Mostly humans stay far from its borders—but Victory Vaughn, Boston’s only professional demon slayer, isn’t exactly human…”

If this blurb sounds intriguing to you, I can guarantee that the book itself more than lives up to it. BLOODSTONE, the third in author Nancy Holzner’s Deadtown series, is a fun and fabulous paranormal romp from the very first page. And the action never stops long enough for you to catch your breath. (As if you’d want to.)

Victory (Vicky) Vaughn is one of the most unusual and likable characters I’ve ever come across in an urban fantasy. Although I will confess, I have a major soft spot for her aunt Mab, and her werewolf-lawyer boyfriend. I even like Tina, her former apprentice (the ONLY zombie character I have ever found likable.) Even more, I love the world that Holzner has created; one that looks a lot like ours, until you peer beneath the surface to find various paranormal creatures (including Vicky’s vampire roommate, Juliet—yes THAT Juliet).

In this installment of the series, a killer who uses a curved blade—nicknamed the South End Reaper—is not only causing death and mayhem, he is creating even greater strain in an already difficult relationship between Boston’s human and inhuman residents. And it is up to Vicky, her friends, and her aunt Mab to find out who is doing the killing and put a stop to him, her, or…it.

If you haven’t read any of the books in this series, I suggest starting at the beginning with DEADTOWN, although any of the books can easily be read on its own. Holzner does a masterful job of building on the previous books while still making each volume a stand-alone novel; not an easy task to do, believe me!

Holzner gets better with every book; I loved this one, and I am waiting with baited breath to see what happens next…

Posted by Deborah Blake at 9:23 PM