For those of you who have been following along with the saga, here is an update on the knee I injured back on April 1st. It has now been seven months, and while it no longer looks like this: 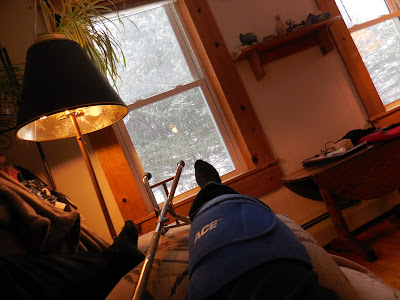 From missing a step while coming down these: 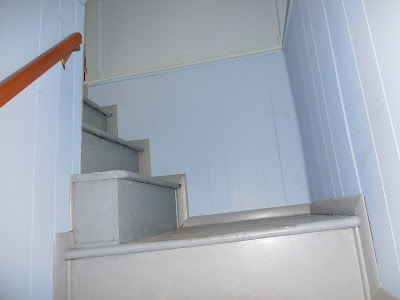 It also hadn't improved as much as my physical therapist would have liked after three months of rest and more than three months of PT. I've mostly stopped limping, but the knee still doesn't bend very far, and it is still sore. (The not bending knee means I can't do most forms of exercise, which is a pain in other ways.)

So I finally broke down and went to the orthopedic specialists, saw a lovely PA named Brinn (who happens to be married to one of the vets at the practice I take the cats to, which made me feel strangely at home). She said I probably had torn the meniscus, and would have to have surgery, and sent me for an MRI.

I went back today expecting to be given a surgery date (which on the down side, would have been expensive and tough to manage during the busy season at the shop, but on the up side, would presumably have fixed the problem, with some additional PT).

But, SURPRISE. No surgery. No tear, actually. (SEE, I was right all along. There you go.) But, and this is the big butt (no smartass comments, since I actually have a big butt after 7 months of no exercise, dammit)...the issue is apparently a bone contusion. Plus arthritis, but since that no doubt existed before I threw myself down the stairs, probably isn't really the problem here.

So the good news is, no surgery. (Yay) But the bad news is that even after 7 months, the bone contusion is taking a very long time to heal, and will undoubtedly continue to do so. (Boo.) No quick fixes. I had a steroid shot, in the hope that it will take down the inflammation enough so that I can make more progress with the PT exercises (I've actually gone backwards in the last couple of months, although no one is really sure way). And other than that, all that I can do is keep working at it and be patient. 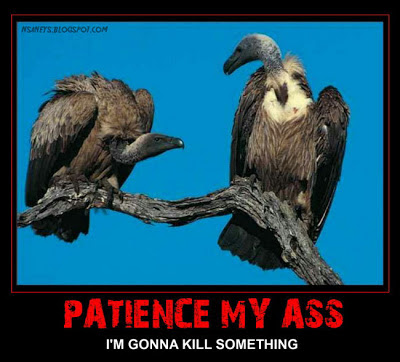 Posted by Deborah Blake at 8:58 PM

Email ThisBlogThis!Share to TwitterShare to FacebookShare to Pinterest
Labels: a day in the life, a knee report, patience