It has been a while since I did a Feline Friday post. Clearly, I'm overdue. (No, really--the cats told me so.)

I'm still recovering from severely twisting my knee three weeks ago, and other than having people drive me back and forth to work (I still can't drive, although I did make a very short excursion to the post office down the street on Wednesday to mail off giveaway prizes, so hopefully soon...) I'm basically stuck inside the house.

This has given me a lot of opportunities to cat-watch, as you might imagine. So I took some extra pictures. Here's one of my favorites: 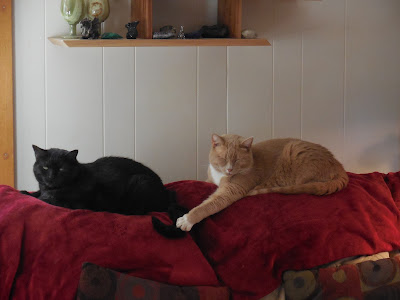 That's Magic the Cat (Queen of the Universe) looking slightly Put Out that her pal Angus has the temerity to touch her tail. But I think it's sweet. Angus has been battling an eye issue (probably viral) one and off since January, and for the last three weeks I've been trying to get antibiotic eye drops into his right eye three times a day. He views this as akin to the tortures of hell, and being a skittish cat to begin with, he has now started running away as soon as I come within five feet of him. Given that he has four working knees and I only have one, this had made the entire thing an interesting challenge... He's now on an oral anti-viral as well, but thankfully my beloved vet was able to get a compounding pharmacy to make it up in liquid form. It was supposed to get squirted directly into his mouth, but not only did that mean catching him an extra two times a day, but it apparently tasted NASTY, since he foamed at the mouth the one time I tried it. Now it is hidden in wet food, and apparently that's working. SIGH. 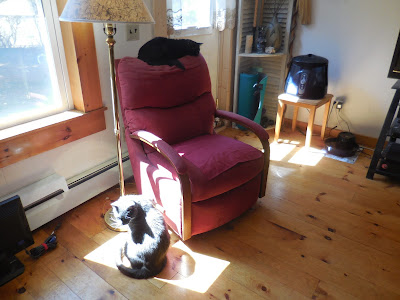 Magic and Mystic enjoying the sunlight. 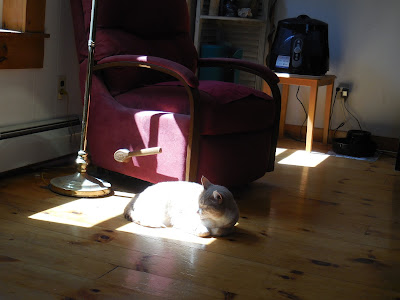 Angus, who took over the patch of sun when Mystic got up, looking perfectly happy as long as I didn't make any fast moves. 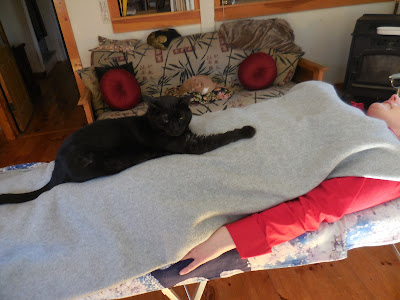 After the first bad week, I went back to doing my energy healing work on my regular client/pal Julie. As you can see here, Magic often gets up and helps. It's amazing how often she puts a paw on just the right spot. (You can just see Angus curled up on a catnip pillow on the futon in the background.) Little Luna, who stays in the upstairs room most of the time because she is too aggressive with Magic and Mystic is too aggressive with her, has gotten the short end of the stick since I hurt myself, since getting up and down the stairs is difficult. Some days, doing it twice to feed her is all I can manage. But there have been a few days when I managed to catch Mystic and Magic napping in the bedroom, shut the door, and let Luna come run around for a few hours. Here she is enjoying the first day of open windows.

Happy Feline Friday to you! Anything fun planned for the weekend?

Posted by Deborah Blake at 8:39 AM