I thought I'd do something new this year, which hopefully some of you will find interesting. I love hearing about the writing process with all it entails (I follow the blogs of a number of other authors), so I decided to add monthly updates so y'all could get an idea of what I'm up to, writing biz wise.

Here's what's happening in January. Let's call it "Juggling January"...that should give you an idea of what I'm dealing with!

The thing about being an actively working writer with multiple contracts and deadlines (as opposed to my earlier years where I was doing a book a year for Llewellyn and writing the fiction obsessively, but on my own schedule) is that you are never just working on one book at a time. In my case, I'm not even working with just one publisher.

I spent from December 29th to January 13th (that is to say, LATE last Monday night) madly writing the prequel novella for Berkley. In some ways it was easier than working on a book--it was shorter, for one thing (it came in at just over 19,000 words--the novels tend to be about 110,000) and because it is an intro to the Baba Yaga series, I had already done the world building and character creating. [The novella will take place right before the events in the first book, and should come out about a month before the September release, as an eBook.] But it was also tougher, because I'd never written a novella before, and wasn't quite sure about the pacing, or the amount of story needed for that word count. Also, I was coming off of the holiday rush at the shop, and it was tough to switch gears back to writing.

In the end, I really liked the way Wickedly Magical turned out, and it went off to Leis Pederson, my Berkley editor an hour ago, right on schedule for my January 15th deadline. Whew.

So now I get a break, right? *insert hysterical laughter here* I did take yesterday to work on the bathroom repainting project (more on that in a future blog post).

Today, I got the proofs for my 7th Llewellyn book, The Witch's Broom. 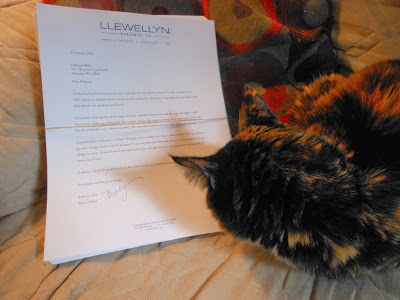 Proofs are the final copy of the manuscript before it goes off to the printer. It is the last chance an author has to catch any mistakes that her editor and the copy editor both missed (and there always are some...the more eyes on a manuscript the better). Usually there is another "final edits" step before this, but my production editor at Llewellyn, the fabulous Becky Zins, said that there were so few issues, she just added them as notes in the proofs.

Because of the way things tend to back up on the desks of overworked and overloaded editors (i.e.--most of them), Becky needs the proofs, with any changes or notes from me, back by January 23rd. Yes, today IS the 15th. Welcome to the wonderful world of publishing. So everything else I was planning to work on now gets pushed back a few days until I can work my way through the manuscript. Hopefully I'll get it done by the end of the day Monday the 20th.

After that, I will be working on the Midsummer book for Llewellyn--this is one in a series of eight books on the sabbats that will all be written by different authors and put out under the Llewellyn name, not ours. It is a small book (35,000 words), but has to contain specific things so they all match. This is what they call a "Work for Hire" project. I get paid a flat fee for doing it, rather than receiving an advance and then royalties like I would with one of my own books. But it should be fun to work on, and I am looking forward to reading the entire series. The appendix is due by the end of the month (since the books will be coming out at different times, Elysia, who is supervising editor on the project, needs to make sure that all the books will coordinate), then the rest of the book will take up February, and probably part of March.

Miscellaneous other writing stuff:
So--that's January in a nutshell.  What's on your "must get done" list? And what do you think of the new title?
Posted by Deborah Blake at 12:15 PM