The Writing Biz: Why Writers Write


I get questions all the time about the writing business and what it means to be a professional author. I thought I would start discussing a few of the basics here...you know, in between pictures of cute cats. Let me know if you have any particular questions, and I'll try to answer them.

Here's the one I've been pondering this week: why do writers write?

Obviously, I can answer that question for myself. But I also have a LOT of friends who are writers, and read the blogs of many of the authors I admire but haven't as yet had a chance to stalk get to know. And actually, it turns out that on this subject, we all agree.

Let me tell you: it's not for the money. I have a few friends who are actually more or less making a living writing, but almost everyone I know has a day job, a significant other with a day job, or both. [I'll talk about the money part more on a later blog post.] Contrary to popular belief, VERY FEW authors get rich. Or even make a living wage.

The fame? Well, not so much. I am finally getting to the point in my career where some people know who the heck I am--if they're Pagans, and if they read. Famous, I'm not. (Although I do get a kick out of it when my grown step-daughter calls me and says she met another Witch, told them who her mother was, and they said, "You know Deborah Blake! Wow." Giggle.)

So why do we do it? Why spend hour after hour writing, when there is a good chance that no one but your first readers, your mom, and some agents will see it (you know, before they reject it)? Or, for the published and reasonably successful folks, why do it when you could make a lot more money doing something else? And have paid vacations that aren't spent scribbling some idea that popped into your head just as you started to relax.

Because you can't NOT write. That's why.

As some of you know, I've been working on my latest novel for about 4 months (not counting the prep time pre-holidays, which was another month or two). I finally finished revisions a week ago and sent the manuscript off to my agent with a huge sigh of relief. I was going to get my life back!

My plan was--and still is--to take a couple of weeks off from writing so I could catch up on the jewelry making, the garden, the yard, and some social obligations...all of which NEED to be done, and I'm way behind on every single one.

And yet...I started thinking about what happens in the next book in the series (following the one I just sent to Elaine), and jotting down a few notes, so I don't forget them. My acquisitions editor at Llewellyn had an idea for a small, fun book that she passed along to me in case I was interested. So I started doing a little research, pondered an outline, and took some notes on that too. And there is the humorous paranormal novel I started at the time I was fighting the beginning of Seeds of Change, purely as comic relief. I'd REALLY like to get back to that one...

I need to stick (mostly) to my plan to catch up with the rest of my life. But the voices in my head are getting louder...

If you write, do you find it is hard to NOT write? If you're not a writer, is there anything you get obsessive about doing? (And no--playing Angry Birds doesn't count. Something creative, like knitting, or making music, or cooking...)

Deb, getting ready to go to her day job (and thinking about the theme for her next Witches & Pagans Magazine column)

Oh, and since it is Friday, here's a Feline Friday picture, just for the heck of it. 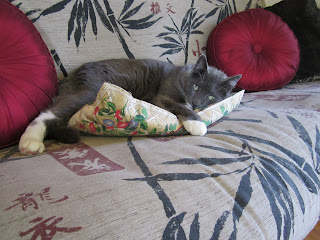 That's Mystic, who somehow still manages to look cute and adorable, even though he's huge. (Seriously, look at the size of those paws!)

Posted by Deborah Blake at 8:43 AM