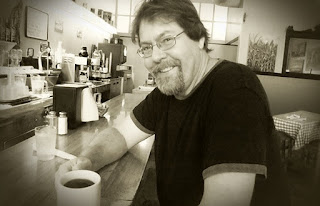 As my regular readers will know, one of my favorite authors is Alex Bledsoe, who I "met" years ago when we both had short stories in the Pagan Anthology of Short Fiction (Llewellyn 2008). Alex is the author of numerous books in the fantasy genre (my favorites, the Eddie LaCrosse novels which are a mix between noir detective and sword and sorcery--brilliant!), a couple of classic vampire horror with a twist, and his latest, The Hum and The Shiver, which may have created an entirely new genre...Gravel Road Fantasy (like Urban Fantasy, but set in the back hills.

Alex's writing is like the man himself--clever, charming, and never quite what you expect. For instance, would you have guessed that the author of all these books is also a stay-at-home dad? AHA! I thought not.

Alex and I decided to exchange blog posts. My post on his blog today can be found at http://alexbledsoe.com/2012/01/30/guest-blog-deborah-blake-on-maladaptive-intertia/ and here is Alex's kind contribution to my blog. Please show him some love by leaving him a comment :-) And as it happens, I have an extra HARDCOVER copy of BURN ME DEADLY, the second book in his Eddie LaCrosse series, which I'll be giving away to one of today's commenters.

And then go on over to his blog and say hi to me there, and while you're there, feel free to explore a little...


FINDING TIME WHEN YOU’RE OUT OF IT

When people find out I'm a full-time writer and also the stay-at-home parent of two small boys (ages 4 and 7), they immediately want to know one thing: how I find time to write.

There's a certain wisdom to the old adage that you find time for anything important to you, and certainly writing is super-important to me. But it's also a matter of prioritizing, and breaking the task down into its components so that you're not trying to do the wrong thing at the wrong time.

For example, for me actual first-draft, pull-from-you-brain writing requires relative silence and solitude. I try to average between one and two thousand words a day, so to reach that goal, I get up early, between 4 and 5 AM, so that I've got the house to myself. That lasts until about 6:30, when my oldest son wanders in for his daily dose of breakfast and Japanese cartoons. Once I've got him settled I might get another half hour until my youngest son awakes, and after that there's basically no more writing. After I get them to school/preschool, I have another break of about three hours.

At 12 my youngest son gets home, and we pick up my oldest at 3:15. Especially in the winter, it means they're around constantly. However, it doesn't mean I can't use the time productively. When they're underfoot, constantly interrupting and demanding unreasonable things like attention and affection, I'm still able to edit and revise. Working on existing text is easier, or at least can accommodate more distractions, than first-draft writing. So when the kids are around, that's what I do.

When you start so early, you often run out of steam (at least mentally) pretty early in the day. By dinnertime there's not much creative juice left. But that doesn't mean I can't work, because that's when I do my research and reading. Since I'm usually researching something that fascinates me enough to include it in one of my novels, it's fun rather than work. And as for reading...again like the old adage says, you can't be a writer if you're not also a reader. I do most of my fiction reading outside the genres in which I write, something I'd recommend to anyone who doesn't want their genre fiction to read like everyone else's. And I read lots of nonfiction.

And with that, my writer's day is done.

I don't hold this up as any sort of example of how it must be done. Every writer is different; some do their best work late at night, which I can't imagine. Some produce first drafts that are very close to the finished work, something else I can't do or even comprehend. But one thing we all have in common is that we've figured out how to make our writing a priority--not more important, but as important as other aspects of our lives.

BIO: Alex Bledsoe grew up in west Tennessee an hour north of Graceland (home of Elvis) and twenty minutes from Nutbush (birthplace of Tina Turner). He now lives in a Wisconsin town famous for trolls. His books include The Hum and the Shiver, Dark Jenny and The Girls with Games of Blood.

And here are a links to a few of his books. Go get one. I promise you won't be sorry. (Unless you read the vampire books late at night. These are NOT shiny vamps. They are horror vamps. Don't say I didn't warn you.)