A Year Without Magic


No, the title of the post doesn't mean I didn't practice magic at all this year, although I did a lot less than usual, to be honest. Today marks the one year anniversary of the day I lost my beloved Magic the Cat, Queen of the Universe. (And then her brother, the gentle giant Mystic, eight days later on the day after their 16th birthdays.) It has been a tough year in many ways, but probably the toughest was that she wasn't here to comfort me when things were bad.

I have been fortunate to have many wonderful cats in my life, but the relationship I had with Magic was unlike any I've ever had before. I doubt I'll find it again, although one can always hope.


She was my nearly constant companion--sleeping by my head at night (and nap time),  and was the only true familiar I have ever had. She came to every ritual we did inside.


She also supervised my writing, sitting next to me at the computer with her head on the edge of the keyboard (or right in front of the screen, as you can see here), and sitting either next to me or behind my head on the couch when I used the laptop. I haven't written as much or as well since I lost her. 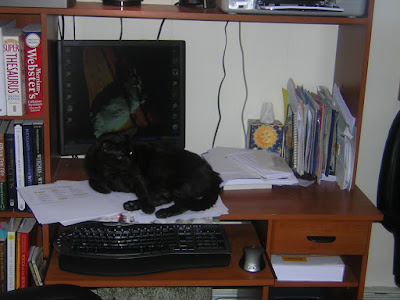 I got the kittens along with their mother Minerva, who I lost the year before, from a local shelter. I went in for one gray kitten, but Magic insisted on coming home with me (and the shelter folks begged me to take Minerva, who was terrified and sickly and completely unadoptable, but loved her kittens more than any mother cat I've ever known). She bossed me around then, and for almost another sixteen years.

As a kitten, she used to leap from the floor to my shoulders (especially so she could supervise me in the kitchen) and continued to do so as an adult until the last few years of her life when arthritis made it impossible. 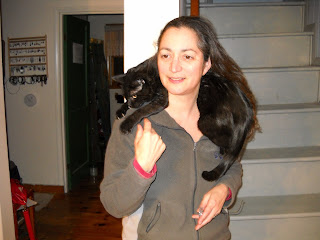 She was as magical as her name, and I have missed her every day of the past year. The new cats, and 13 year old Angus, are great. But she left a void no other cat can fill. I expect to continue missing her (and her brother) in every day of the year to come, another year without Magic. 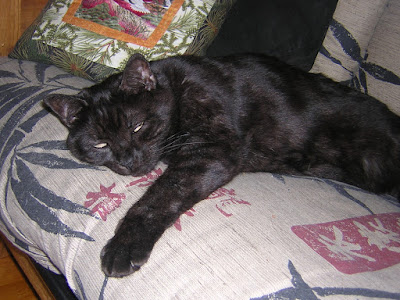 (I should add, lest this seem too sad, that I am beyond grateful that I had them at all, and that I got almost 16 years with them. It was one of the greatest gifts of my life. I can still feel her presence very strongly, mostly in bed at night, which is the only place I also sense Mystic, and sitting behind me on the couch. No doubt she is still supervising me. I'm grateful for that too.) 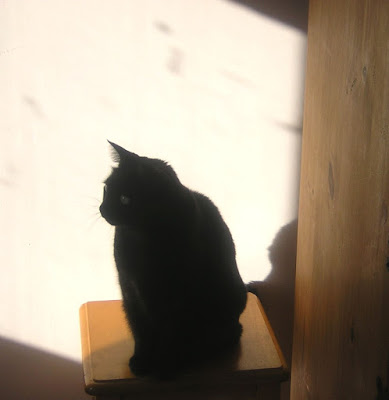 Posted by Deborah Blake at 4:49 PM