One Week 'Til Veiled Menace Giveaway!


Holy crap--how did it get to be a week before the release day for Veiled Menace already? First winter was lasting forever, then spring finally showed up, and now we're almost to release day, April 18th!

I hope you're as excited as I am. In case you haven't seen the blurb for VEILED MENACE, here's a quick glimpse into the second book in the Veiled Magic series:

Since Witches came out of the broom closet in the early twenty-first century, they have worked alongside humans as police officers, healers, stock traders, and more. But they aren’t the only paranormal entities in our world…

Witch and police officer Donata Santori is no stranger to magical mayhem, but lately her life has been unexpectedly charmed. Her job as a Ghost Yanker now includes the occasional paranormal investigation, and she’s advancing her magical abilities with the help of an ancestor’s treasured spell book. And while both of her former love interests—reclusive half-Dragon art forger Peter Casaventi and disgraced Shapechanger Magnus Torvald—are nowhere to be found, she’s not averse to being wined and dined by wealthy businessman Anton Eastman.

But Eastman isn’t what he seems, and what he wants from Donata is far more than she’s willing to give. When a mysterious relic, the Pentacle Pentimento, resurfaces, along with Peter’s Dragon father and a shocking Santori family secret, Donata must fight to save herself, her friends, and just maybe the fate of the world from a magic as old as it is dangerous…

I love this cover sooooo much! 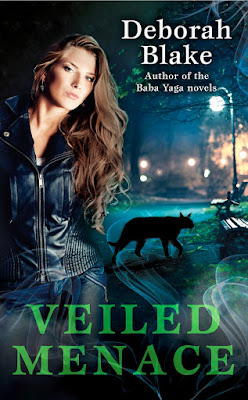 If you've been hanging around this blog for any time at all, you know what a book release means--GIVEAWAY!!!! Check out this cool bunch of goodies I've put together for you this time.

There's a notebook, postcards, and a magnet with the cover on them, a cute stuffed dragon (I just love these little guys), a broom pen, chocolate, and a $10 Amazon gift card so you can buy yourself a copy of the book to read. In fact, since it is only $4.99, if you haven't bought VEILED MAGIC yet, you can get them both!

As always, all you have to do is fill out this simple Rafflecopter form. And yes, you get to take credit for things if you've already done them in the past, like following the blog or following me on Twitter. Have fun, and be sure to come back the day before the book comes out for the BIG giveaway!


Be sure to spread the word. *smooches*

Posted by Deborah Blake at 6:50 PM