So, when last we left our intrepid heroine, she was suffering through a warm Florida sunset on her way to dinner with fun companions. It's a hard knock life, I say.

So...I'd been looking at the place we ended up going to dinner, since you could see the side of it from the hotel, but hadn't made it there last year. It was quite the experience! (I may have gotten 4-year-old-at-Disney excited. Just ask Lucienne. No, on the other hand, don't.) I present...Joe's Crab Shack (I highly recommend it if you happen to be in Daytona Beach).


I had a bib too. Our waiter created each of them individually. I forget what it said. I was distracted by the seafood boil pot Alethea shared. It was heaven! 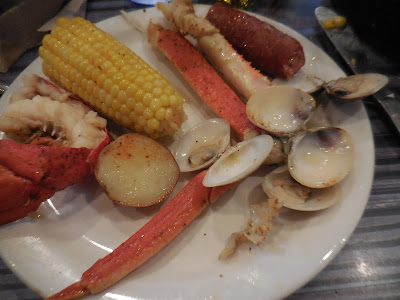 To make the evening even more amusing, about halfway through dinner all the waiters stopped what they were doing and went to the sides of the room, where they proceeded to do a synchronized dance. It was hysterical. In fact, the service, the food, and the atmosphere were stellar. I can't wait to go back next year, if I'm at the con.

We were all stuffed, so the five of us shared this insane S'mores dessert. Heaven. We might have had to be rolled back to the hotel. 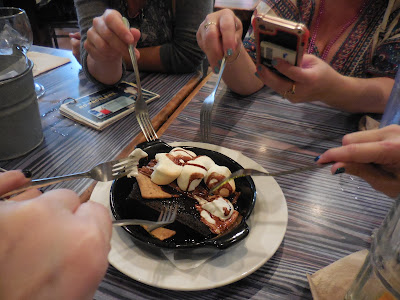 Friday night was also the dance party mixer, where Lucienne dragged me out onto the floor to dance a couple of times, gimpy knee and all. Lots of people dressed up as their favorite novel or movie characters. I loved these costumes so much, I dragged these two out into the hall so I could take their picture!

Lucienne wore her goddess costume from the afternoon, but I just wore, you know, clothes. Which apparently meant I should be attacked by a dinosaur. Yeesh.

Thankfully, there are no pictures of my dancing. The bad knee did not add to my gracefulness, although it held up pretty well considering the insane amount of walking I did during the con.

Saturday morning started with another beautiful sunrise. A girl could get used to this. 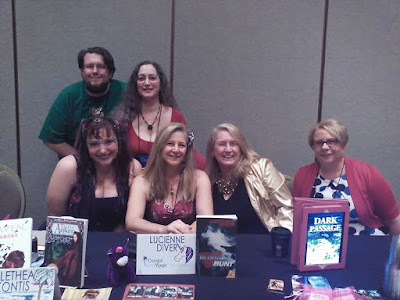 Then I snuck out to the beach again for a while. Sigh.


Saturday lunch was a fun event called "Lunch with an Author," where readers got to sit and chat with the author they signed up to dine with. Then there was the group book signing.


Afterward a bunch of us staggered back to Bubba Gump's to grab a late dinner (the book signing went until 7:30). Later that evening was Game Night, where authors hosted a table at which people could come and play a game with them. Lucienne brought Cards Against Humanity and we stayed up way too late having way too much fun.

Sunday morning Lucienne and I did our (now traditional, apparently) Mythology Jeopardy game panel. So much fun! I think you might be seeing a theme here. Now you know why I went a second year and may well go back next year as well. SO MUCH FUN and all the good peoples!

All too soon I was on a plane going home, and back to this:

But also back this, which makes it all okay.

All in all, another great event(hotel renovations aside, and that was really just an annoyance). Jennifer Morris, who puts on the con, does an amazing job. If you can, I'd highly recommend going next year. I hope I get to do it again. Maybe I'll see you there!